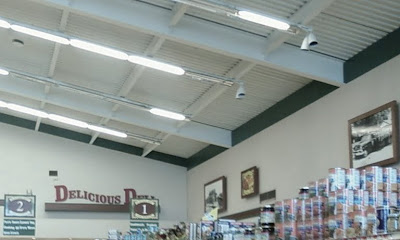 The Neighborhood Market decor... appearing only in a few select stores. The ones I know of are Clayton and the former Jersey City store, and St. Michaels of Maryland. The picture above is from the Clayton store. It is a must-see location. The only remaining pitched-roof store still open for business. True, there are other pitched-roof store still operating but they have all been expanded and significantly remodeled with many of their original features removed or altered. Clayton has all of it's original pitched-roof charm.
This decor package has hints of the Chalkboard Market look but oddly does not include department signage except for the "Delicious Deli". The black and white photos along the walls are of local buildings and attractions. Some of the stores have framed illustrations as well.

The Delicious Deli in the former Jersey City store. This location had the 80's Remodel until it was switched out for the Neighborhood Market decor in the early 2000's. The checkerboard floor remained. Look closely on the aisle markers... "Acme Markets... Jersey City's Best".

Jersey City could have used a better wall color. The huge walls were a little on the drab side here.

Here's a closer look at the aisle marker.

The "Dairy" cow. It's unfortunate that this store didn't have bolder department signage. Produce and Bakery had no signage whatsoever. The wood trim around the store had to be left off on the areas where the walls curve. The curves were standard issue in late 70's and early 80's stores.

These are pictures from the Cape May store... the only store in the entire Acme chain to have a custom decor package. This store will be explored more fully on an upcoming post. The "Neighborhood Market" theme was taken to a whole new level here. The interior design of the store matched the new look of the exterior.