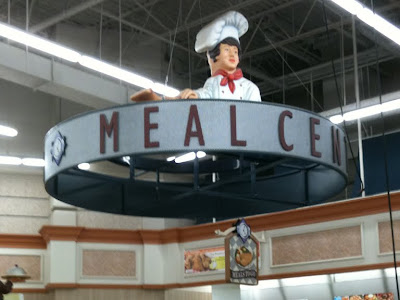 For the Grand Finale of decor posts... Acme Style presents the Limited Edition Acme Theme Park decor! This decor package was used in the early 2000's for only a hand full of stores. I don't think it's the the best overall look Acme has had but it is definitely the most ambitious... and has to be the most expensive.
All pictures here were taken at the Milltown New Jersey store. The only other Theme Park store I have been to is Yardley New Jersey. That store was remodeled to this look while Milltown was built with it. I hope to get some pictures of Yardley to add to this collection in the future as it has a few things that Milltown does not.

The Meal Center is located at the main entrance. Shoppers walk right into the cheese case which directs traffic straight to the Deli.

Cool murals on the wall in Produce. The green light fixtures were also used in the Industrial Circus decor.

These old fashioned illustrations are also seen in some Neighborhood Market stores. Lights directed at the decor and props around the store were not on. 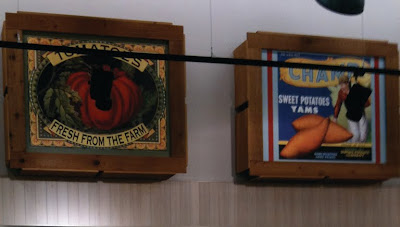 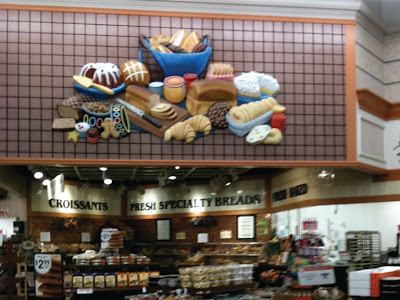 The Bakery is located in the back corner at the end of the Produce aisle. The selection of baked goods at this store seems to be much larger than other Acmes I have been in. The Bakery feels like a separate store here. Has a very nice hardwood floor. 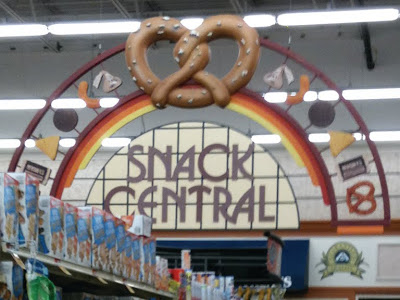 Not sure if they were trying for 70's retro here or if it just turned out that way. You can see the Albertsons logo there on the wall... it's used as a stamp of quality around the store. 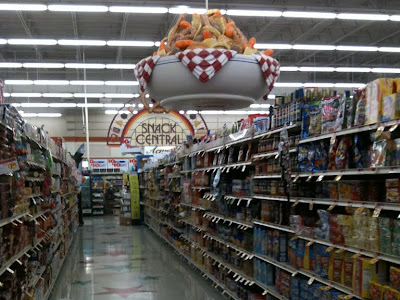 The bowl of chips has to be the coolest prop I have ever seen in a grocery store. Can't imagine how much something like that costs. Check out the stars on the floor in this aisle. Several aisles have special tiling as you will see below. 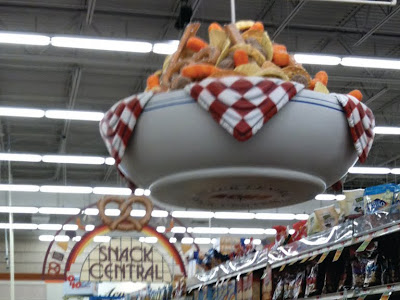 The bowl of chips has a sprinkler coming out of the bottom of it! 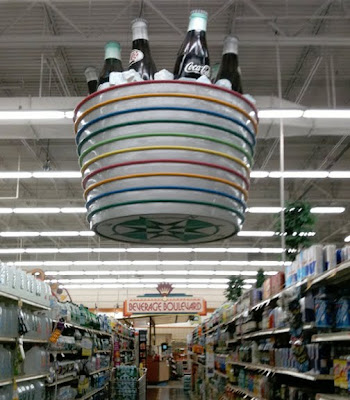 The barrel of soda bottles is huge! 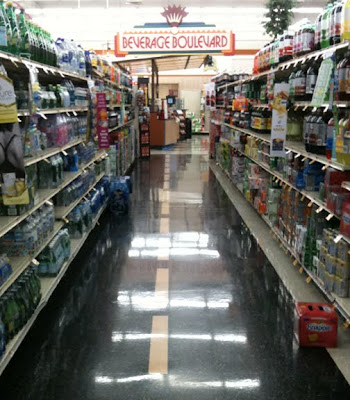 Looks like the aisles may have moved a bit since the store opened... or not planned quite right. The one problem with decor like this is that it makes it nearly impossible to rearrange the store. You'll see an example of the problems it can cause down below. Regardless... kids must have a blast shopping with their parents in this store. 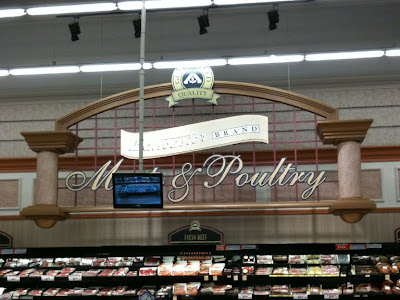 Lancaster Brand above. Butcher shop below... 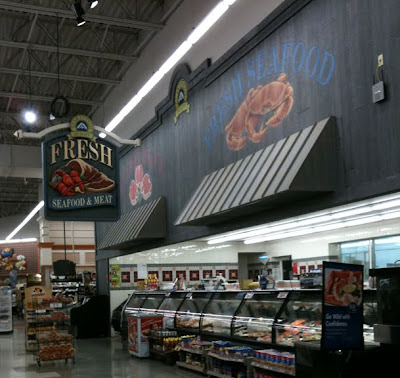 The service Meat Department has the feel of a store within a store like the Bakery. 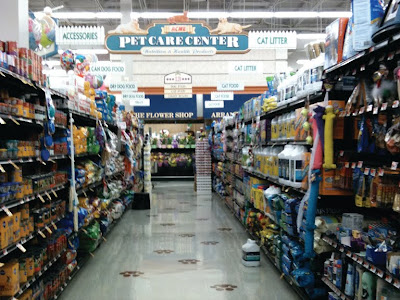 Check out the white picket fences for asile markers and the paw prints on the floor. 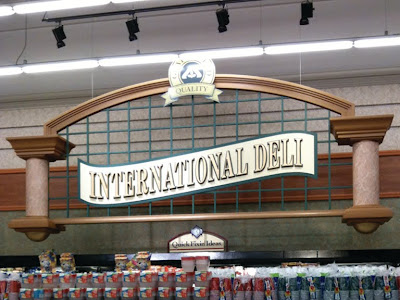 For this decor package, the Deli Meat Department goes International! 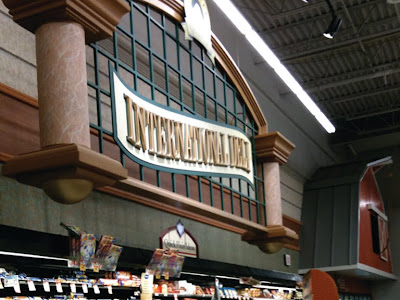 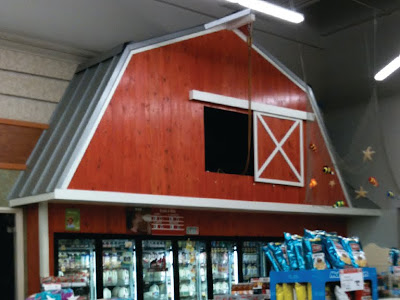 You get your milk out of a barn... how cool is that. 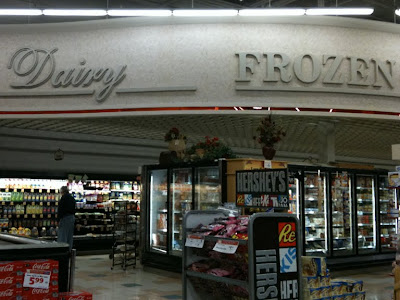 The design kinda craps out for Dairy and Frozen... 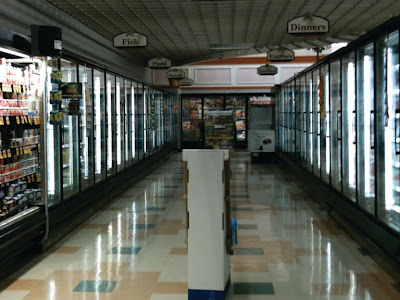 This tile floor pattern was also seen in the Cape May store. It's a little too dark and dreary in back here compared to the flash and pizzazz of the rest of the store. 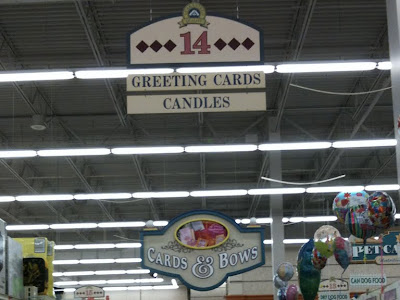 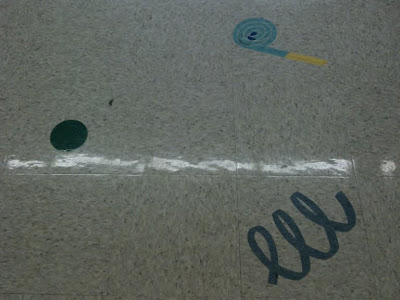 Confetti and party favors on the floor of the greeting card aisle. 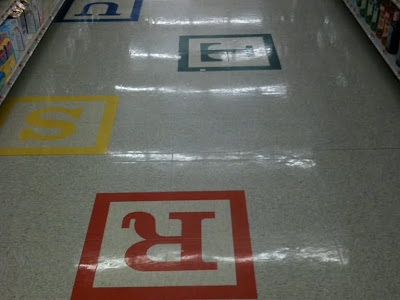 The Pharmacy is closed here at the Milltown store leaving the future of this location uncertain. 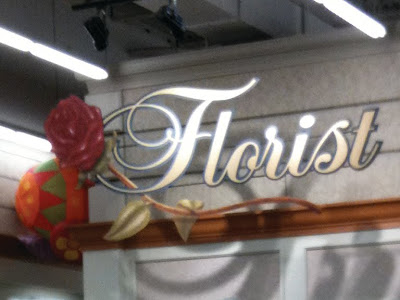 The Video department has been reduced to a Red Box vending machine and is filled with other odds and ends.

No reading going on here... books and magazines have been moved to the Video Department while the Reading Center has become the 10 for $10 Department. As great as this signage is, they should probably take it down.
Posted by Acme Style