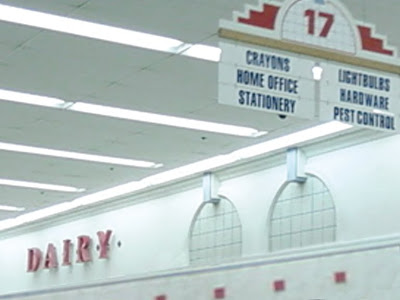 Apologies for the poor picture quality here. These were all taken with an old cell phone at the Morrisville PA store. Didn't realize how bad they were until I started preparing this post. I will be stopping by this store again soon for a reshoot. Unitl then...

Welcome to the 90's Red, White and Blue decor... part of a complete floor to ceiling reinvention of the Acme grocery store as we had known it to be. By the mid 90's, American Stores had finally gotten serious about building new stores and, more importantly, replacement stores to it's severely aging fleet. Up to this point, Acme had focused largely on remodels and expansions of existing stores which, despite all the efforts, still kept Acme lagging behind the competition. Enter the 90's "mega-store" concept...

The gigantic Quakertown store is a great example of the new 90's stores, dwarfing all other Acmes that have come before. The layout of the sales floor remained similar to the late 80's superstores... now super-sized with expanded service departments. The biggest change in the floor plan came with the relocation of Customer Service to the front and center of the store with double entrances and exits on either side. These new stores were built in and around the Philly market area never reaching into North Jersey, Maryland or Delaware.

The Produce alcove... an Acme staple for many many years running... continued on here, bigger and better than ever with the addition of huge arched windows to the rear.

Arches continuing to play a role for the third decor package in a row. Nice to finally see custom designed aisle markers to match the decor. Gone are the bulky plastic ones which hung in Acmes for decades.

The Red, White and Blue decor is gone now from most stores although not due to full remodels. Many stores received what's referred to as "repaints" which basically entailed a fresh coat of paint on the walls and a switching out of the department lettering.

The iconic red oval logo bit the dust sometime in the early 90's in favor of the block letter logo. This logo did not sweep very quickly through the chain. I may have first seen it in '93 or '94. The red lettering falls a little flat here on the brick facade. Acme has recently switched the logo to white on stores being remodeled with the "Premium Fresh and Heathly" decor.