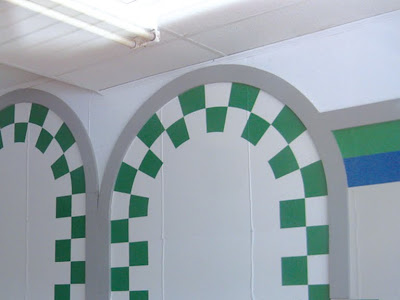 One problem coming out of the 80's remodel was that stores began to appear dark and dreary. Something missing from the 80's remodels were improvements in the lighting. Added to that issues was tan color used on the walls. Many Acmes began to feel dull compared to other grocery stores of the time. Acme addressed these issues in the early 90's by rolling out the "Checkerboard Arches" decor. Walls were painted bright white, checkerboard patterns with rich, bold colors were put up, and new light boxes were hung from the ceilings. Stores that received the deluxe version of the package had lights installed along the tops of cases illuminating the walls. This is one of my favorite decor packages. It did a huge favor to smaller outdated stores by bringing much needed life and excitement to the look of the store.

Department names were moved up to ceiling preventing them from being blocked by merchandise placed on top of cases... something Acme was notorious for especially in their smaller stores back in the 80's and 90's. You could find park benches, bicycles, TV's, VCR's, beach chairs, microwaves, coolers, garbage cans, ferns, barbecues, air conditioners.... there was hardly an item in existence that Acme wouldn't try to sell.

The Checkerboard Arches went into some stores that were passed over during the 80's Remodel like here at the Washington store.

A sampling of some merchandise that could be found on the cases.

The new light boxes over Produce and the checkouts. Larger stores also had them installed over the frozen food cases.

The blue light boxes over the checkouts. You can see some remnants of the 70's decor along the back wall... the orange and brown panels lined the Meat Department until multi-tiered meat cases were installed which covered the panels.

Many stores were done just in blue and green. The red and blue combination was more often seen along the back of the store for the Deli and Meat Departments. 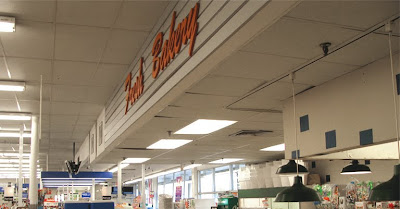 Hanging lights were put into the Bakery and Deli departments. Here you can see the cursive font used in the Bakeries.

Faux awnings were also added to some of the service departments. It's tough to see the one in this photo there along the windows... might have been the plant and floral section here.

The death of the CSR stand could not have come soon enough. Checkerboard Arch stores saw the return of the Customer Service "department" often coupled with an express register to the side. The store safes were moved back off of the sales floor to more appropriate locations that were not within reach of the customers. Chances were much great of finding assistance here thant at the infrequently manned CSR stands.
Posted by Acme Style