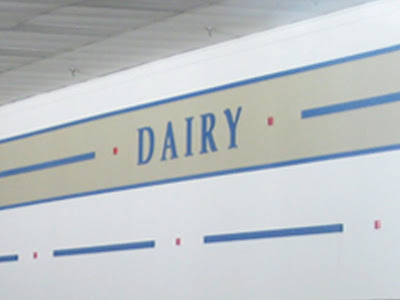 So here were are heading into the late 90's. Acme has about four types of stores at this point...

1. New and remodeled stores with the Red, White and Blue decor concentrated in and around the core Philly market.
2. Checkerboard Arch decor in decent volume small and medium sized stores.
3. The 80's Remodel still in place in stores whose sales have fallen since the 80's and/or stores that Acme isn't interested in upgrading. Many of these stores having the 80's upgrades removed like Full Service Seafood, Salad Bars and In-Store Bakeries now reduced to just baking bread.
4. And believe it or not... a good amount of small, low volume stores still sporting the 70's decor.

I'm not 100% on how things played out at this time but here's what I speculate... American Stores decides to put itself up for sale. I believe the company was having problems but not sure how severe they were. Before showing stores to prospective buyers, Acme needed to freshen up old rundown locations on the cheap. Nothing says neglect like 70's decor when everyone has Y2K on their minds . Although, to their credit, some of the 70's decor stores were looking better than the 80's remodels.

Enter the "Convenience Store" decor... the one and only name I did NOT make up! This was by no means a remodel. It entailed nothing more that repainting the walls and putting up new department signage. The look based loosely on the Red, White and Blue decor of the early 90's. Some stores did receive new cases if desperately needed while others received cases removed from stores that had closed. Flooring was not replaced. 80's remodels kept their checkerboard tiles and the only 70's decor store that I know of getting new flooring was Sparta... but only portions of the floor were replaced.

The Convenience Store concept included the reduction of merchandise offered by stores. General Merchandise took the biggest hit. The idea was to convert these locations back to old school grocery stores rather than small stores desperately trying to be super-stores. The Sparta location was touted as one of the test locations for this format. Nearly 25% of shelving space was removed from this already impossibly small store creating nothing more than a big 7/11. Shockingly, it did not prove successful. Sparta closed in 2001. Nearly all other "Convenience Store" formats were closed soon after Albertsons purchased American Stores in 1999. The only one I know of still open today is the Acme in Fallston, Maryland.

This is the abandoned store in Berlin, New Jersey. It started with the 70's decor as you can see remnants of along the Meat Department. The brown and orange paneling was covered over by tall meat cases during the 80's remodel. This store had the checkerboard flooring til the very end.

This looks varied a bit from store to store. The biggest difference is the font used on the walls. I don't think I have ever seen the same one in two different stores. Acme probably purchased whatever kind of letters they could get there hands on rather than designing custom lettering.