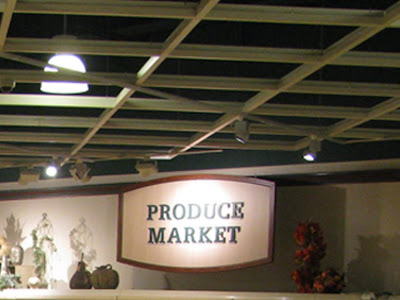 Welcome to the Chalkboard Market decor! This name will make more sense as you look through the pictures (most of which have been kindly provided to Acme Style by Rob Ascough).
My decor knowledge gets a little fuzzy around this era. Hoping someone can help fill in the blanks. I am not entirely sure if this was American Stores' last decor package for Acme or... if it was the first look brought in by Albertsons. These extensive remodels occurred in the late 90's around the same time Albertsons bought American Stores. New stores were also built with this decor in place from the start.

This decor package included two big changes for Acme...
1. A complete reinvention of interior lighting. Several different types were put up around the store to create a warmer atmosphere. Departments along the perimeter had track lights which could be adjusted to focus light directly onto merchandise. The grocery department had low hanging rows of fluorescent lights. The overall effect created a much warmer environment than in Acme's previous interior designs.
2. The creation of the market area or "grand aisle". All food service departments were moved to this area with Produce cases lining the other side of the grand aisle. This allowed for all sorts of high profit items to be displayed throughout this area.

This is a shot from the Rockaway store which had it's 80's interior virtually gutted during this renovation as were many other 80's remodels. The produce aisle was to the far right with a low reaching drop ceiling. You can see this in a picture from the Berlin store. This low ceiling section typically covered Floral, Produce and the Deli areas, and appeared again in the far corner of the store over the Bakery department. These sections were all removed to help open up the store. The Bakery and Deli were relocated along the right wall where Produce used to be. Most stores had a Starbucks added into the front corner where Floral was located. The Seafood department was expanded into the old Deli location with the Meat department remaining along the back wall. Health and Beauty Aids moved from a regular aisle to the corner formerly occupied by the Bakery. Customer Service was moved next to Health and Beauty from it's original location by the entrance. All of this allowed for the entrance area to feel very open and welcoming. The 80's Acme entrance commonly lead one into the Floral dungeon with virtually no natural light. The Produce departments were closed in by cases on either side of the aisle and were quite dark as well.
Rockaway did have the big hanging lights in the green section which you will see in other pictures in this post. They were replaced at some point with recessed flourescent tubes. Not sure why. Rockaway received a rather watered down version of the decor compared to other stores in the area.

The Shrewsbury store has the most chalkboards I have seen in a store. It was here that I decided on what I would call this decor... since I never found out how it was referred to in the company. Some stores received way more chalkboards than others. They were a nice touch which helped Acme to feel me like a local market than a big corporate chain.

The Haddonfield store is extremely small but has been remodeled very nicely with this decor package. You can see a few old black and white photos there on wall which later became the cornerstone of the "Neighborhood Store" decor (still to come). The photos were of old buildings and historical locations in the surrounding town.

As you can see here, Acme started getting serious with decor elements. Maybe overly so. I am not much of a fan of the fake flower arrangements put up on the cases around the store but these are some nice touches here.

Here you can see the new placement of the Customer Service and Floral departments. The beige ceiling area is above the grocery aisles. These remodeled stores also saw a reduction in cash registers down to as few as 5 checkouts from more like 12 during the 80's.

The decorative grids that were hung from the ceiling differed significantly from store to store. I'm not certain I've seen the same kind in two different stores! Regardless... I do think the grids created a very cool effect.
Posted by Acme Style