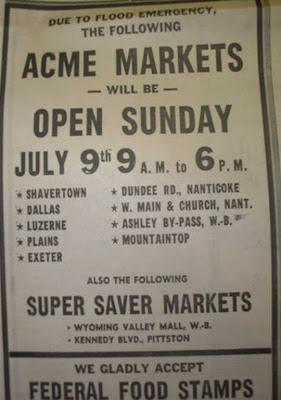 I have posted some more pictures in the Wyoming Valley Acme collection. Post with updates include:

Shickshinny: Unbelievable image of what the store looked like originally.

Kingston: The Acme building is still standing! Street level pictures have been added.

The advertisement above shows Acme's special Sunday hours after the Wyoming Valley flood of 1972. Several locations were damaged during the flood and had to be closed for repairs. You can see flood damage in the Edwardsville and Midway Shopping Center pictures.

The ad also lists the new Super Saver store at the Wilkes-Barre Mall which was not yet built when the "There's a friendly Acme Market near you!" was printed in 1969. It's a bit of mystery why the Pittston store was not shown on the map but is now mentioned in this ad of '72. The Pittston store was a pitched-roof store which replaced a smaller store located on Main Street.