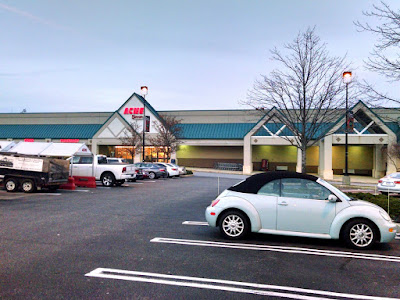 The Norristown Acme finally makes its way to Acme Style! I've been hanging on to pictures of this store for years now. Visited the place back in August 2009 and took some interior shots with the flip-phone I had at the time. The pictures didn't turn out so great so I had hoped to get back here one day. Haven't made it yet but Michael has been here and is sharing photos with us. I've included a couple of the pictures I took as well to see some of the changes that have happened since 2009.


We'll start out with some history of the store courtesy of Josh Austin's flickr page...

Opened as Giant-MD's Super G in 1994, replacing a Thriftway/ former A&P that was demolished. Sold to Supervalu in 1998 after Giant-MD merged with Giant-PA, as there's a Giant-PA nearby in Audubon. Became Shop n' Save, which closed in 2001 along with the Laneco chain. Reopened as Acme in 2003.

When I stepped into this store, I was baffled by the layout. Got about 1/2 way around the store and thought this was the strangest Acme I've ever been in. And then it hit me... the place stared out as a Giant! The biggest clue was the location of Dairy along one exterior wall while Frozen was all the way on the other side of the store. This was typical for the Giants that opened in the area in the early 90's. I also noticed that many of the cases in the store had been spray painted black which further convinced me that Acme had taken over an existing supermarket. Strange as the layout was, and still is, this was a very nice Acme back in 2009 and it appears to be just as nice today. It still sports the Industrial Circus decor which Acme is no hurry to remove from stores. A couple of recently "remodeled" locations have had the decor completely untouched. There has been some lighting changes here which we'll see below in some "before" and "after" photos. 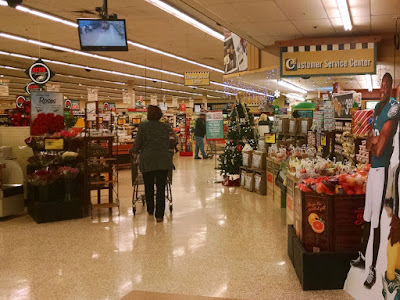 Shoppers enter and pass Customer Service as they head into Produce which is along the front-end of the store. Registers are to the left.

Some observations from Michael:

The store was quite busy on 12/6 at around 4:45 PM when I was in there to take the pictures. I was in this store when it was a Super G and it had the typical mid-1990s red themed neon interior. The store is long but relatively narrow, typical for Giant-MD store designs of the time. This store has the additional lighting that was installed by Albertsons that we have seen elsewhere. Acme has retained most of the Super G layout with some exceptions mentioned below. Overall a nice looking store.

Additional details from Michael are in italics throughout the post. 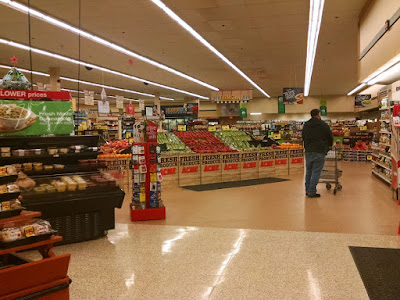 Floral is now at the end of aisle 1. When Super G was here it would have been at the far end behind and below the Farmstand sign. 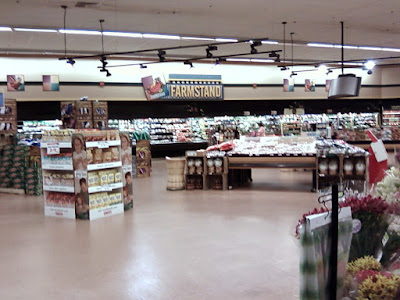 Photo from 2009 showing the old spot lights in Produce. 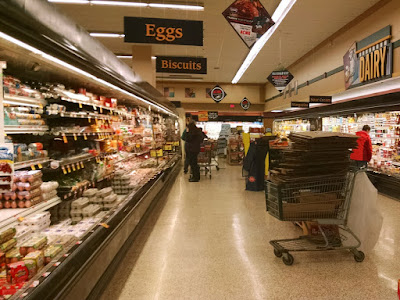 Produce along the front leads to Dairy along the right wall. Black and gold category markers remain from Alberstons' first round of ownership in the early 2000's. 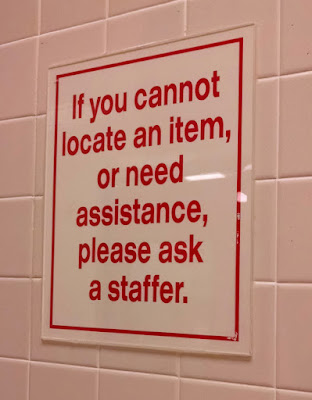 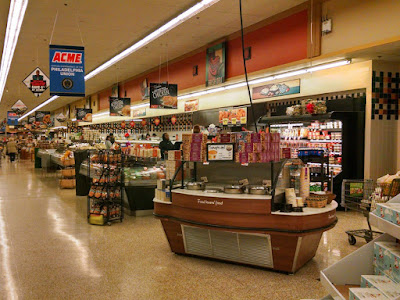 Service departments all along the back of the store.... 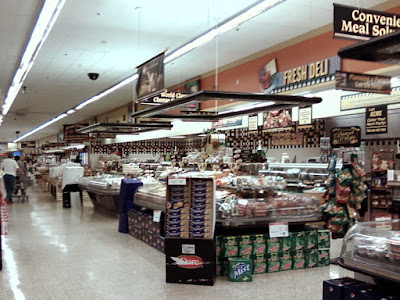 Lights above the the cases have been removed. I thought they were really cool looking at the time. 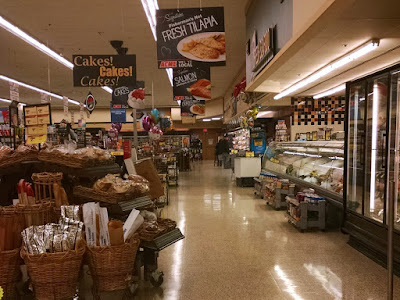 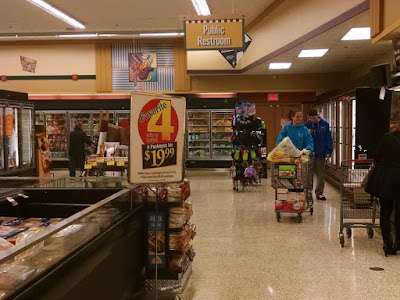 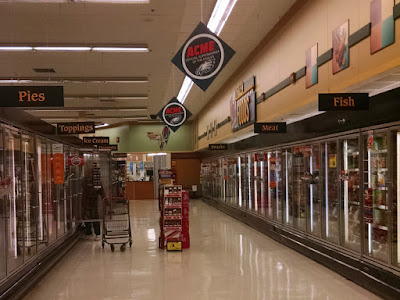 Frozen along the left wall with the Pharmacy up in the front corner. 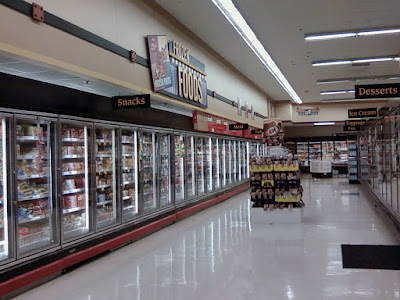 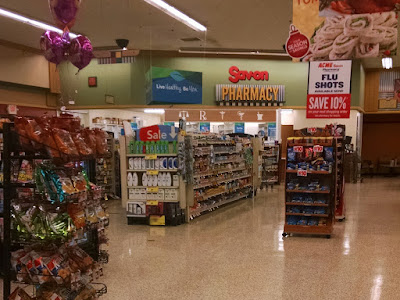 This probably was a general merchandise area under Super G since beer and wine can't be sold in PA grocery stores. This was typically the Super G beer and wine section in areas that allowed it. 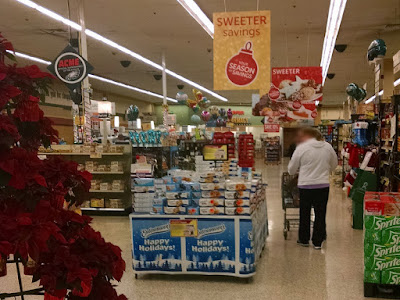 Self-checkouts still up and running here. 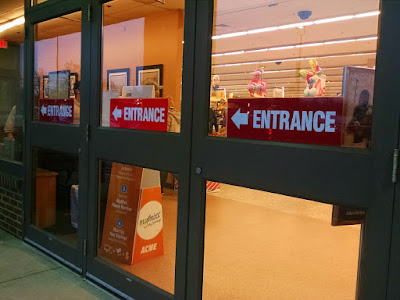 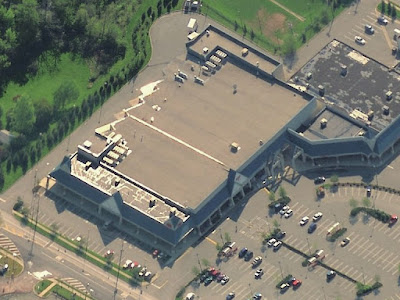 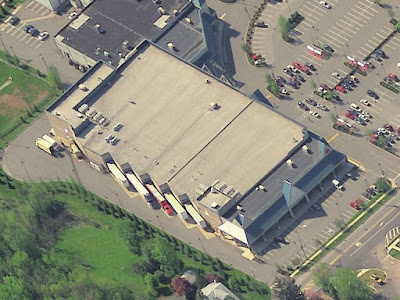 This loading dock arrangement was typical to Giants-MD built at the time. ShopRite uses this same setup at many of their stores. 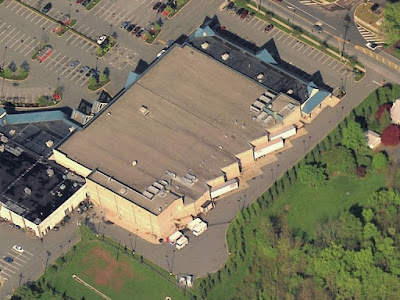 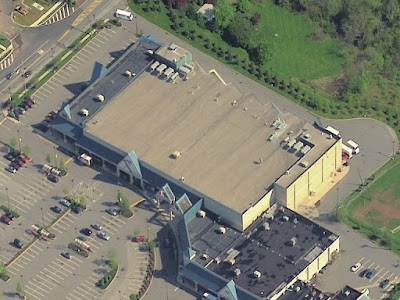 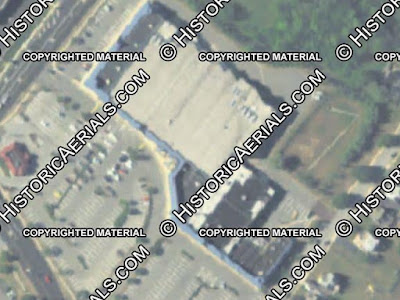 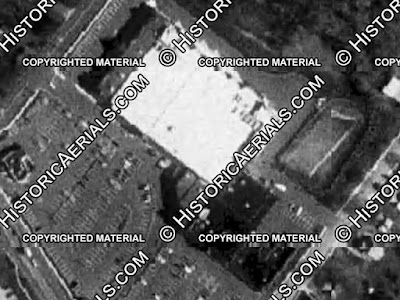 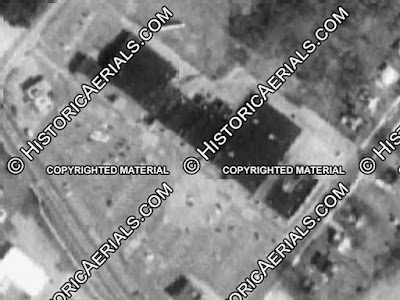 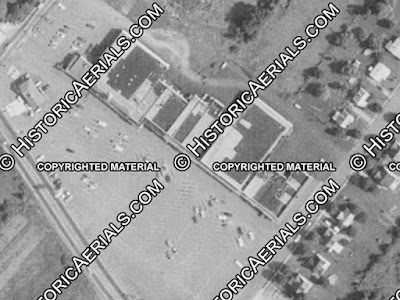 1971
You can see the former A&P at the left end of the shopping center. 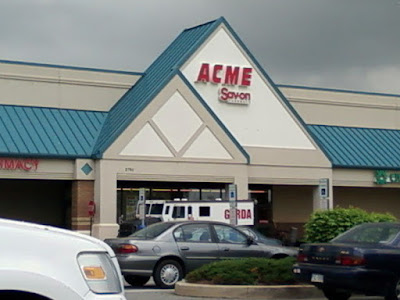 Thanks to Michael for bringing the Norristown Acme to Acme Style!
Posted by Acme Style