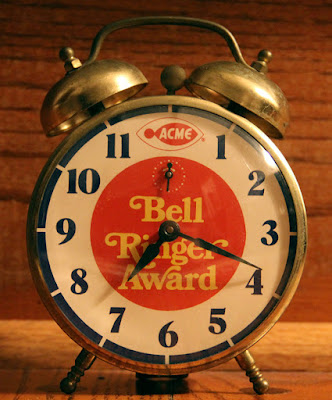 Photo courtesy of Will aka B-More Retail on flickr


Will discovered this very cool clock at an antique store in northern Baltimore County, Maryland. He posted a photo on flickr and asked if anyone knew the meaning behind "Bell Ringer Award". Ben Schumin tool a chance at passing the question along to Acme's facebook page and received a detailed explanation...

"Bell Ringers” was a marketing promotion from the early to mid 1980’s. It combined special weekly price reductions on selected items that were referred to in Acme Ads as “Bellringers” and part of an overall Advertising campaign “Acme Super Savings Time.” It was also tied into the fact that all Acme Markets were given uniform Hours of Operation daily from 7 AM to 11 PM and Sunday 9AM to 6 PM. The “Bellringer” Alarm Clock was an internal recognition award given to Acme associates for achieving various business goals tied to the ad campaign. We hope this is helpful!
-Rebecca, Customer Support
Posted by Acme Style