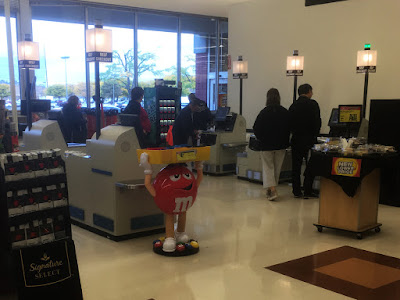 Couldn't believe my eyes! Walked into the Edgewater store yesterday and saw five brand-new self-checkouts. The store had five full-serice registers open as well  bringing the total registers open to ten! You don't see that happening in many Acmes. All registers were busy with minimal lines. Should have been this way from day one.

So the three registers to the right are for small orders. There is only one bag rack and no additional space to set items. The registers to the left have two bag racks and space to set items not being bagged. The smaller registers might be a challenge if you fill up one bag. Where do you start putting the rest of your stuff? If you take the full bag off, the system will lock up. Guess you just have to cram everything onto the small platform until you pay.

The interface is totally generic and identical to what is used at other stores like Home Depot. Doesn't even have the ACME logo on screen like A&P and Pathmark did or like Stop&Shop does now. I believe the interface is what Acme used to have on their self-checkouts. Can't say for sure as I rarely shopped at Acme before they returned to my area.

I mentioned to the cashier that it was about time they brought these back. As she was walking away from another customer she said (and I'm paraphrasing) "I was just saying... all the money they wasted ripping out the other registers to put these back in. Such a waste." She then pointed to the floor under the registers on the left that still needs to be redone. For a second time. Oh well. Hey, there was TEN registers open in Edgewater yesterday! That's a big step in the right direction.
Posted by Acme Style