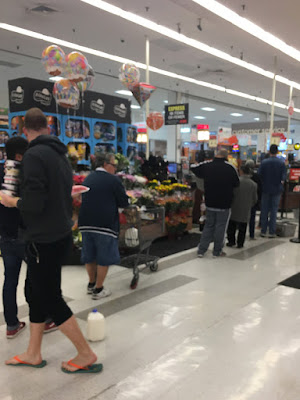 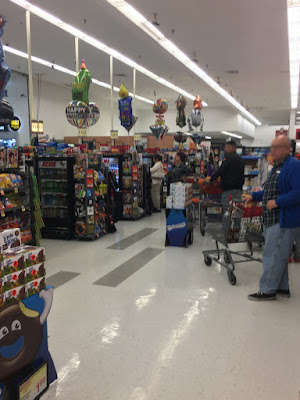 Made the huge mistake of stopping in the Weehawken Acme for a two items. Before I got in the ridiculously long line at the express registers, I walked along the front-end to see if there were any other options. Shocked to see just ONE register open for all the non-express shoppers. I even double checked to make sure one was open but had the light off. Nope. All closed. As you can see above, the shoppers in line at the lone open register were looking toward Customer Service with a "what the hell" look on their faces.

The manager on duty was walking around, clearly saw the lines and did nothing about it. I wasn't surprised. I've seen managers here standing around completely unfazed by absurdly long lines. The two express cashiers kept looking back  to see how long their line was. They were nearly as frustrated as the customers. When I finally made it up to one of the cashiers, I asked "why are there never any registers open here?" She put her hands up in the air and shook her head while saying "The company... the company..." I took that all to mean they don't get enough labor hours for cashiers. But they certainly seem to get enough labor hours for the store as I always see plenty of employees walking around this place doing absolutely nothing.

Back in the early to mid 2000's, Pathmark used to run this place with nearly every register open on a Saturday. There would be lines of customers at every single one. Of course Pathmark ran into it's own problems which chased most of those customers away but it baffles my mind that Acme is doing nothing to win any of those people back. In fact, they're offering even worse customer service than Pathmark ever did! If the self-checkouts were still here, Acme could have just one additional employee on the clock and have SEVEN registers up and running for shoppers. But I suppose that would make too much sense.
Posted by Acme Style