Step Inside the Lansdowne Acme! 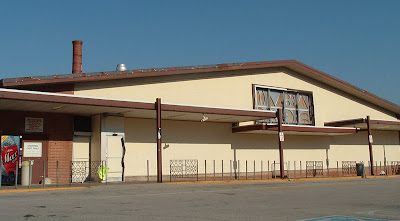 Photos courtesy of Gary in DC

Big day at Acme Style! First off, welcome back to everyone who's checking in today. I announced back in July that the blog would be on break until today but I wound up resuming posts a week early. After you finish here, be sure to check out the posts of the Medford Acme and an ad for the grand-opening of the Pitman Acme that went up last week.

For today's post, we're returning to the former Lansdowne store for an exciting LOOK INSIDE! What were about to see here has never appeared on the blog. In fact, this combination of model type and interior decor is something I have never seen in person or in pictures. I have been hoping, since the very first day of this blog, that photos would eventually come in... and they finally have!

So what's inside? Well, Acme fans it's the 80's Remodel! Up until now I have seen pictured-roof stores with all sorts of decor packages... 70's Colonial, Checkerboard Arches, Neighborhood  Market, Convenience Store... but never the 80's Remodel. I had mentioned this previously on the blog and Gary had contacted me a while back to tell me he had these pictures. Problem was, they were on an old computer and he wasn't sure if he could retrieve them. Torture! After some finagling, he was able to access them and sent them in. #1 item on my wish list now checked off!

Now the photos I have to share here are rather limited. Gary was taking some pictures of the fixtures shortly after the store closed for good. His intentions were not to photograph the store's decor. We will only be getting some glimpses of the left side of the store where Frozen and Dairy were located. There is, however, something very interesting to see along the back wall. It's something I have never seen in all my years of visiting 80's remodels! 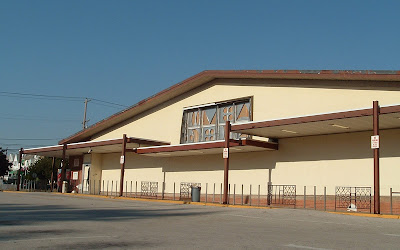 Quiet a long time ago, Gary sent in the exterior photos shown here. Apparently I never posted them. I was quiet sure I had but can't find them anywhere on the blog. If you've seen them before on here, let me know! They may have been part of an update post. In the photos, we're seeing the Acme boarded up with the sign removed. We're also seeing the tiles that made up the interior sign. As mentioned before, these were always left in place as they as the tiles were part of the support structure for the front wall. The colorful plastic panels have been removed. (For a view of what this sign looked like from the inside, check out the Clayton Acme by clicking here.) A close-up is right below... 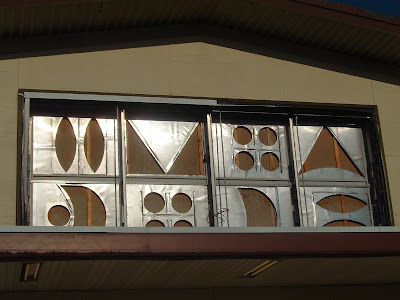 Now we'll head back in time with an exterior photo sent in by trex354. This photo was included in the original Lansdowne post which you can visit by clicking here. 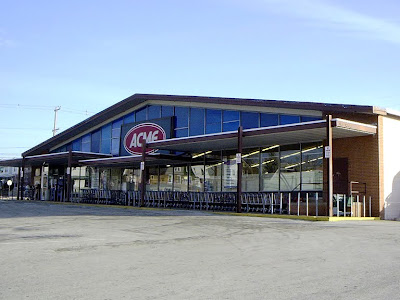 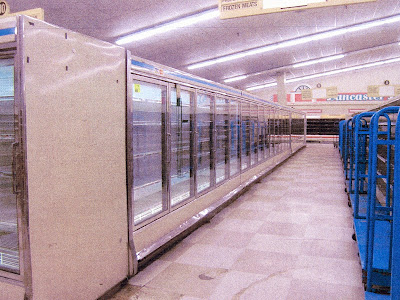 Well I never thought I'd live to see the day! The 80's Remodel in a pitched-roof store. And still looking pretty darn good when this store closed in 2005. The Frozen Food cases all appear to have survived from the remodel. We can see some newer black cases back in the Meat Department. Hey, what's on the wall back there? "Lancaster"?? Did Acme come to it's senses at some point and ditch "Quality" which was standard issue during the 80's Remodel? Look below for a close-up... 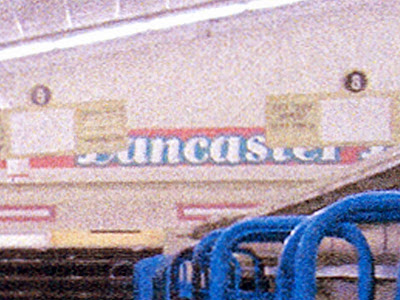 I thought maybe they just added Lancaster here and had the sign read "Lancaster Quality Meats" but that's not the case as we was can see a sliver of the "M" behind the marker for aisle 8. (For a look at the 80's "Quality Meats" sign, please click here.) Notice too, the ceiling has tiles and is not exposed like most pitched-roof stores. No idea if this store was always like this or if the tiles were added at some point. 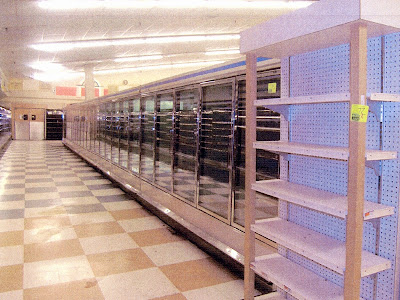 Aisle 10 is a continuation of Frozen as well as the Dairy aisle. Interesting to note here... in the 50's stores the frozen food cases shared the same same aisle. It was during the 80's remodels that the cases were backed up to each other having frozen foods run along two different aisles as seen here. 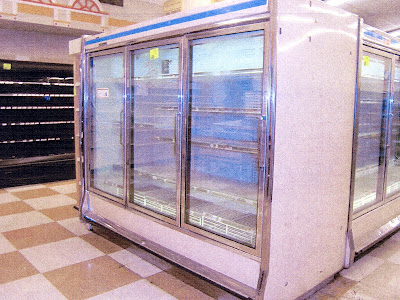 Sleek black cases put into the Dairy aisle at some point. This store must have been doing fairly well into the early 2000's. It did outlive a much larger Super Fresh that was located just steps away. Notice that this pitched-roof is very similar to the one in Paulsboro. The roof extends all the way to the Dairy wall. Most stores like this had the last aisle or two located under a flat drop ceiling. For a look at a similar store check out Paulsboro by clicking here. Compare that store to the more common set up like the one in Parkesburg by clicking here. 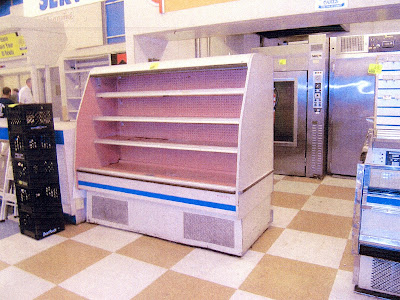 They even squeezed in an In-Store Bakery! To the right is Customer Service. You can see just a tiny bit of "SERVICE"in the upper-left hand corner. This sign is from the Checkerboard Arch decor package of the early 90's. 80's remodels were stripped of the Customer Service office in favor of the CSR stand which never had any signage indicating what it was. A similar situation played out at the now-former Adams Avenue Acme in Philadlphia, where the 80's remodel remains until today accompanied by the 90's Customer Service sign. Click here for a look. 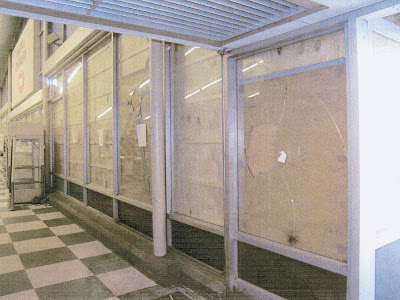 The front wall of the store. The colorful Acme interior sign sadly covered over in beige... 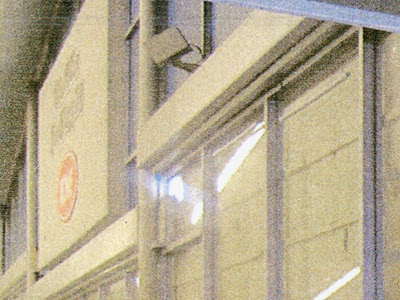 A closer look at the red-oval logo with "Thank you for shopping" right above it. 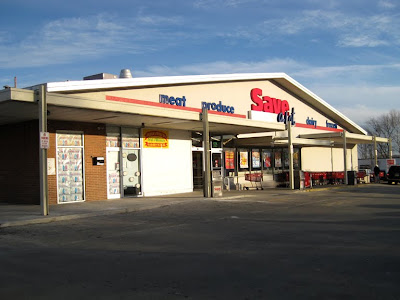 Today Save a lot calls this former Acme home. For additional coverage of how the store looks today, visit the original post by clicking here.

Thanks again to Gary and the effort he made to get us these pictures! A pitched-roof/80's Remodel has finally made it to the blog!!
Posted by Acme Style