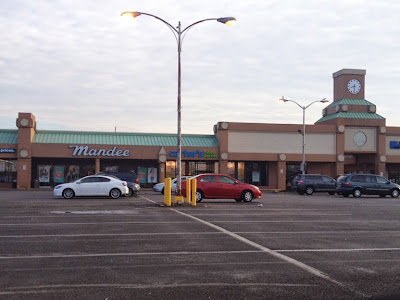 And here we are with yet another "return" to a store that has been previously covered on the blog. This time around, we're getting a look at things from ground level. The original post contained aerial views only as I was attempting to wrap up coverage of the Jersey Shore stores. At time, I wasn't even sure that this exact building was the former Acme of Toms River. Turns out it was. It is now divided into a Mandee, Carter's and a third space that is currently not leased. The Acme ended just before the clock tower which has been built over a driveway which runs along side the building… 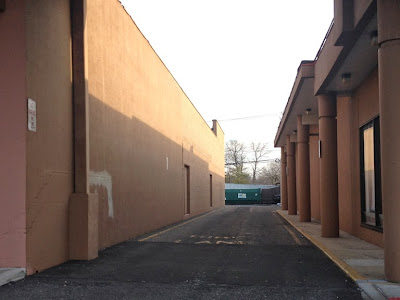 The former Acme on the left. I would assume that the doors towards the rear were used mainly for produce deliveries. This section was part of a measly 15 foot addition that was added in the late 60's. Bill Haines shared that information in the comments section of the original post. Looking at the aerial images, the addition is quite evident. It also included a second floor for compressors. I have no idea of what the layout was here but I would guess this addition provided for a produce alcove here in the front corner. According to the historic aerials, the building on the right arrived sometime between 1963 and 1972. 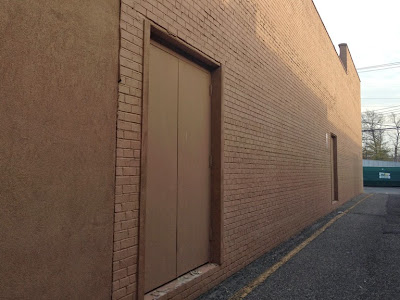 A closer look at the doors along the side before we swing around back which is chock full of Acme goodness. 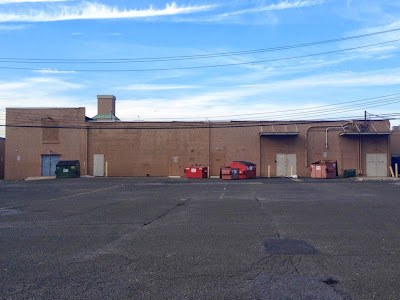 Delivery doors with NO docks! Check out the compressor room door up on the second floor… 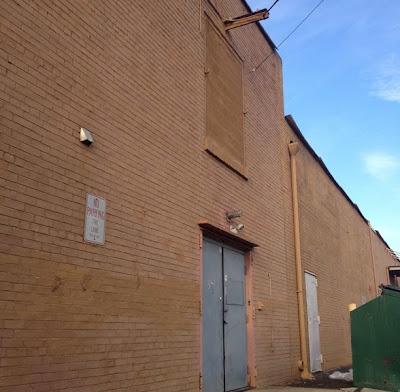 Completely sealed up but the lifting beam remains intact after all of these years. 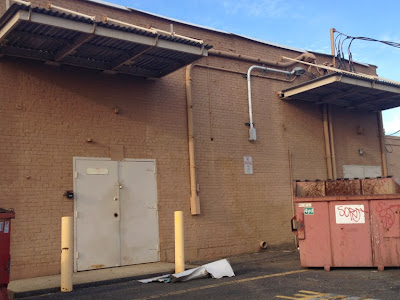 These awnings are up so high they probably didn't do much to shield the delivery areas from the rain. 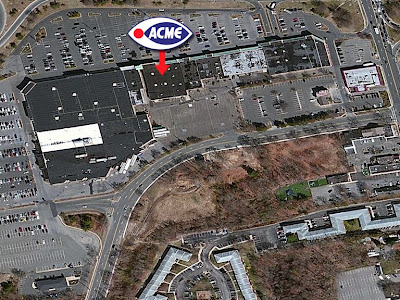 A view of the whole shopping center as it is today. Notice the little building in the lower left-hand corner. Doug got a shot of it's sign which looks very similar to an old Acme sign… 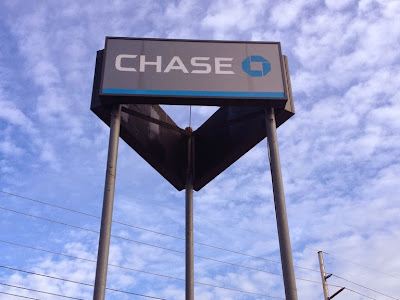 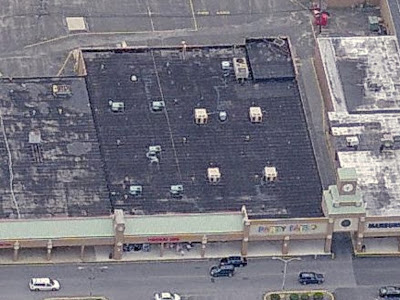 The stores seen here in this aerial shot have been replaced except for the party store who's space is currently empty. You can easily spot the former compressor room in this view. 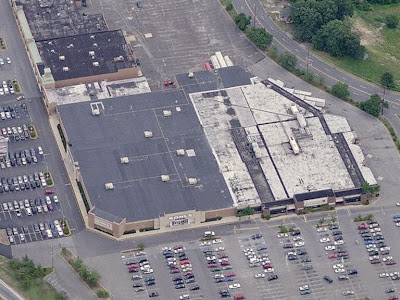 Today Kohls and Foodtown are to the right of the former Acme. 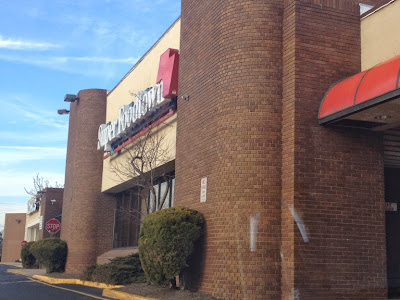 Foodtown is currently taking a hit from a brand new ShopRite across the street. 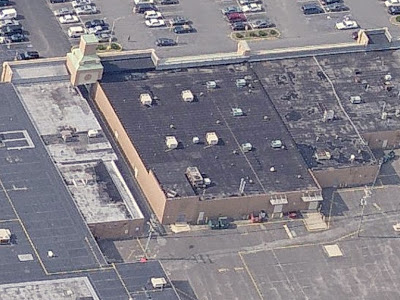 To this day, you can still see a faint line the runs along the roof where the addition joins the rest of the building. 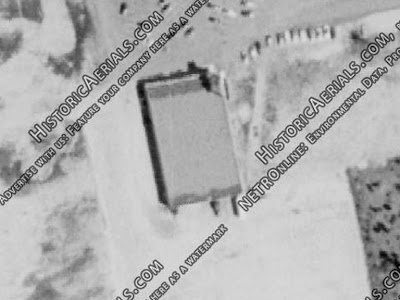 1956
Acme opened in December 1954 and as of 1956, it remained the only building on the property. Judging from the shadow in the upper-right hand corner of the store, there appears to have been an elevated sign next to the building. 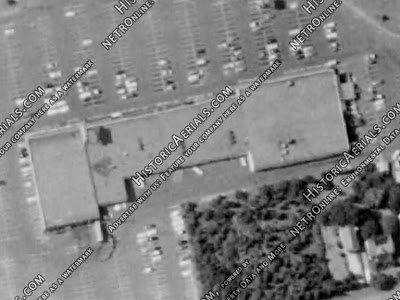 1963
More stores added to the left side of the Acme. No addition yet to the right side. 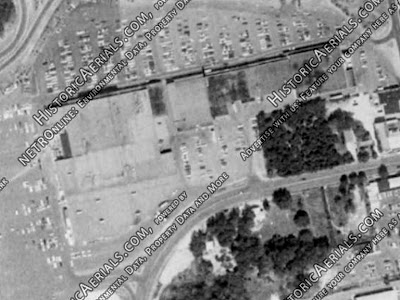 1972
Massive buildings added to the right side with an alley between the Acme building and the new section. 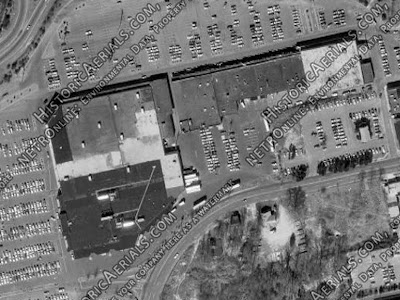 1986
As far as I know, the Acme was long gone by this point. HUGE crowd at the Foodtown.

The Toms River Shopping Center store replaced a metal front Acme on Main Street in downtown Toms River. The store was expanded in the late '60's with about a 15' addition on the right side, which can be seen in the photos. The signage was changed at that point from the signature to the fisheye logo. The massive building to the right and in the rear was W. T. Grant/Grant City. Back in 1961, when the Barnegat store closed, being the last Asco Service Store in Ocean County, the groceries were transferred to Toms River. ShopRite was across Rt 37. It closed about ten years ago, and ironically, a new Saker ShopRite is being built on that site today, even though the other ShopRite's in Toms River are Perlmutter stores. Not sure how they work things out on that score!


Want to have a look at the original Acme on Main Street?

Click here and look over on the left edge of the photo. Doug and I have been trying to pinpoint exactly where the original Acme was located on Main Street. This is where I'm placing my bets... 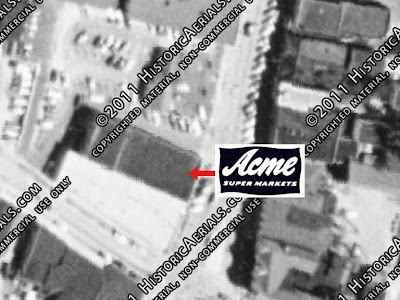 This is approximately 22 Main Street. The Acme, along with the building to the left of it, have since been torn down. A 7/11 now sits in there spot. A Chase Bank is now located where the Mobil gas station originally stood. You can see the Mobil in the old Acme photo if you look very closely. And if you're not careful, you can get lost in that old photo for hours!

UPDATE: Yes! That is exactly where the Acme was located. Doug was able to track down yet another old photo which confirms the location. In the photo, you'll see the 3-story Ocean House which was somehow located on this property as well. It was literally on top of the Acme.  By 1956, the Ocean House was relocated to another part of town. Below is a link to the second classic photo of this Acme. The link will take you to a full photo collection (a direct link is not available). The Acme is in the 9th row down, 4th photo over. The thumbnail won't look like it's the right one but it is. Click on it and the scroll back to the top of the page were it can be viewed at a larger size. Here's the link…

Thanks to Doug for his on-the-ground coverage and extensive research of the former Toms River Acmes!
Posted by Acme Style