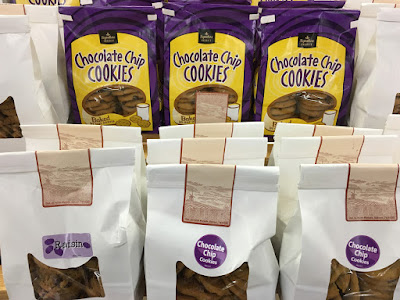 The original Chocolate Chip Cookies bag is back! This time around the Acme logo has been replaced with the new Signature Select logo. SuperValu had gotten rid of these colorful packages years ago in favor of the plain white ones you see in front. These cookies are big business at Acme. They're prominently featured in the Bakery and regularly shown in the weekly circular, often on sale. Not sure if the other banners put as much emphasis on these goodies. I imagine the new/old bags will be coming for the other varieties soon.

And... the New Signature Select logo has also been added to the muffins boxes. The old Albertsons box, which has been inexplicably kicking around for years now, is shown on the right. The day I no longer see that logo/leaf in Acme cannot come soon enough.

P.S.: These photos were taken at the Edgewater Acme this past Saturday morning. As I've mentioned before, I've been a pretty regular shopper at the store since the late 90's. In the last few years, I've watched the business plummet. You could literally hear a pin drop at 11:00 on Saturday morning. They would usually have two full service registers open along with the four self-checkouts. Rarely any lines. Now I walk in and see more shoppers in the Produce department than I would see in the entire Pathmark! Acme has been running nine to ten registers on Saturday mornings with customers checking out at every lane. There's a ton of competition in this area that really seemed to decimate the business at Pathmark including Target, just across the parking lot, Trader Joes and Whole Foods just up the street. From what I've observed at this store in the past few months, I would venture to say that Acme is doing twice the volume Pathmark did in its final years. It's really nice stepping into the store now and feeling like it's alive rather than gasping for its final breath!