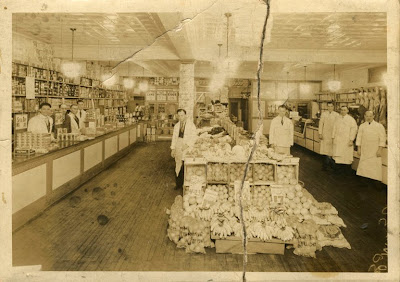 Greg shares another classic photo he's found. We had a look at his picture of an old Acme in Wilmington Delaware back in June. He shares the following details of this old store in Media Pennsylvania...

Another one I've come across, a badly damaged photograph showing the interior of the Media, PA American Stores Co. market (pre-Acme!) located at State & Plum streets in Media. According to the writing on the back of the picture, it was store No. 1400, and the picture was taken February 19, 1932. You can see Louella Butter and other brands advertised on the back wall. Plum St. no longer intersects with State St.; it has been replaced with a pedestrian walkway on the north side and a building on the south. Deals Variety Store is located at that intersection, and still has historic interior details such as the tin ceiling, though I don't believe it quite matches the ceiling shown here. Still, the exterior of Deals does look like one of the old American Stores so I wonder if it could have been it? 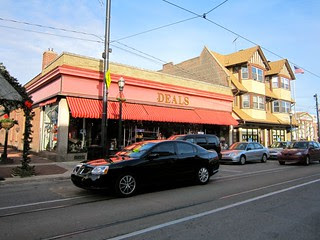