Another Friday, another all-time favorite! This one came by surprise. Dwayne sent these photos in just days ago and I've been stunned by them ever since. The pictures you are about to see are the exact reason why I started Acme Style. Back in the early 2000's, I was relentlessly searching the web trying to find all sorts of pictures of Acmes and not coming up with much of anything. I desperately wanted to create a site where pictures just like these could be shared. Now what's even more remarkable about this post is that a picture of the abandoned Cambridge Acme did come up in my searches all those years ago. Ten years later I am now able to share pictures of both the exterior and extraordinary interior. A big thanks to Dwayne for sending them in!

This store opened in the 70's and closed in 2003. Dwayne was the grocery manager here. He provided some details about the history of the store...

When the store opened in the Seventies it had little competition, Safeway came and after that the store averaged in the 170k range. They closed in 1987 and the store did in the high 200k and made good money for a short time. Super Fresh opened in the Safeway and then Food Lion came along, after that Metro Food Market and a Wal-Mart (not a super center though). The store did a little over 100k after that and was losing alot of money. A little hope came along as Metro closed in the late 90's. The store didn't benefit as the business only increased around 10k. Corporate was threatening to close the store for years but we kept it alive as we started to shrink the deficit, actually making money the last quarter before the store closed. Albertsons also sent us remodel plans at one point but slowly pulled the plug on that after a year.The town never supported anything there as all the stores were cherry picked. Even a brand new Super Kmart closed in the 90's and the Wal-Mart never was busy as a typical Wal-Mart usually is, that is why I believe it stayed as a conventional store for as long as it did. In 2003 the lease did expire and the company finally gave up and we closed. The store was always a nice clean store and if the company tried they could have made it there. Super Fresh and Metro now gone, Food Lion is still there as well as Wal-Mart, I'm not sure if they are a super center now.

A satellite image with all the surrounding competition Dwayne mentions is down below. For now, let's get ready to head inside... 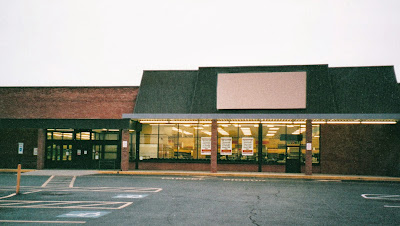 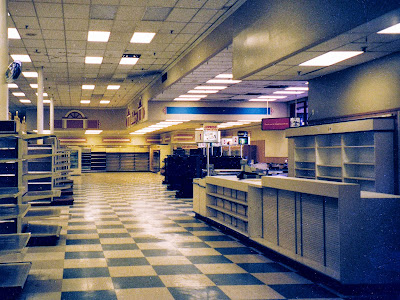 The 80's remodel completely intact right down the layout! All of the changes and adjustments made at other 80's remolded stores were never made here. The Customer Service area seen may have been revamped after the CSR stand was killed off. Everything else is remarkably the same since grand reopening back in the late 80's.

As you can see, the store has been totally cleared out but remains in an very clean and orderly state. Aisle markers still hung, department names on the walls, and cases and shelving all still in place. It's like all the merchandise was raptured outta here! This is the absolute best look we've had so far at the 80's remodel. Could I be more excited about it? No. Let's take a look around... 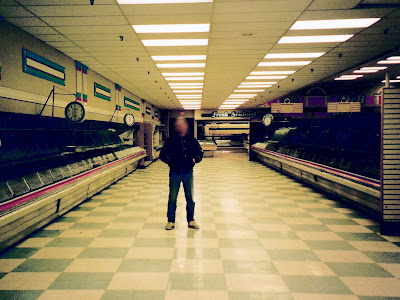 The official 33M format Produce aisle! I've mentioned this before but we have never seen a picture of this area still intact. I talked it about last Friday in the Westmont post. We could see the drop ceiling in the Produce Department but the area had been opened up by removing the first aisle or two. Here we finally see the produce cases lining the right side of the department! Below is a shot from the former Fallston store where the cases have been removed and Produce expanded creating a much more open area. This was done at many 33M formats with or without a major remodel accompanying it. 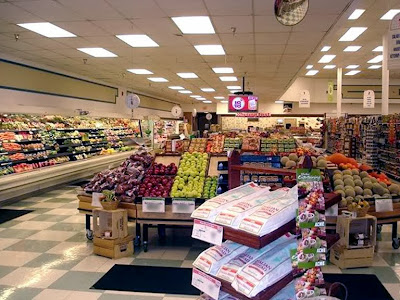 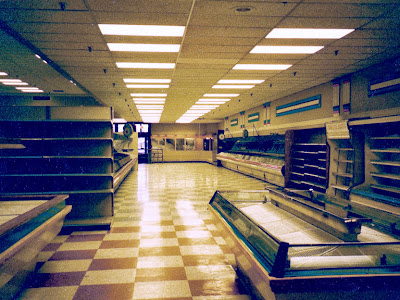 Incredible shot here! We see Floral all the way in the front. Down at this end, we have the Cheese From Around the World case on the right and the Salad Bar on the left. Both cases remain from the 80's remodel. They didn't last this long in a lot of stores. The Salad Bar got the ax in the 90's in many locations. 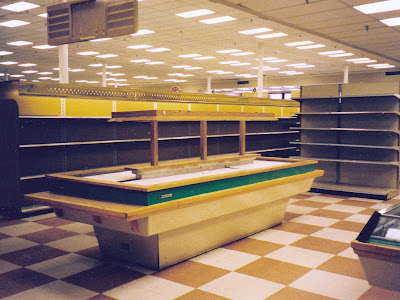 The aisle markers remain since day one. They were not changed out during the 80's remodels. 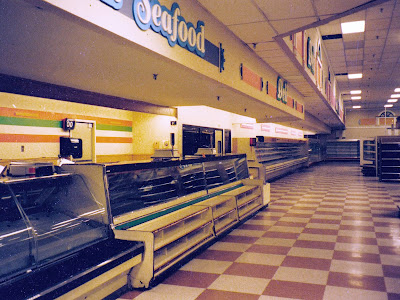 Looks closely... Seafood has the ship streering wheels at each end of the blue stripe! They weren't always included. Sharon Hill and Secaucus didn't have them. We have seen them at the abandoned Newtown store and the former Adams Avenue store in Philly. Check out those Deli cases! Still kickin' from the 80's. Not sure if the Seafood cases are the same. It is remarkable that service seafood made it all the way to the end. This department was switched to self-serve cases at many locations as the 90's wore on. 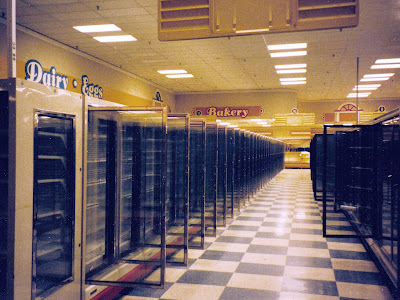 The frozen cases look to be newer. Can't tell if the right side matches the left side. You can see more of those curved ceilings up in Bakery that I mentioned last week in the Westmont post. 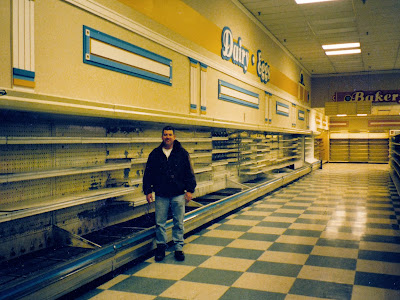 The dairy cases look unchanged since the 80's. Great shot of the Dairy wall too. First time we're seeing those blue an yellow columns on the blog. This store had high ceilings and a lot of wall space unlike Sharon Hill and Secaucus. Dwayne is making an appearance in our last few pictures... 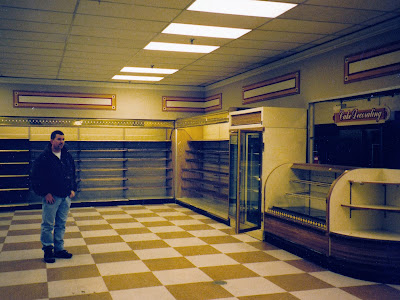 I believe this store had a Bakery before the 80's remodel. The 33M stores built in the late 70's and early 80's usually had them included. They were expanded in the remodel. This whole area looks completely unchanged since the 80's. Nice little "Cake Decorating" sign about above the service counter. 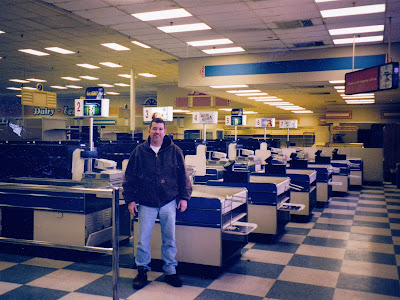 Great look at the front-end! Staggered registers. Not something I've seen before. The checkout stands remain from the 80's remodel. My store had the same exact ones but we didn't get the remodel, dammit. And the famous Acme clock on the right side in an unusual spot. They're hung over the exit in most stores. 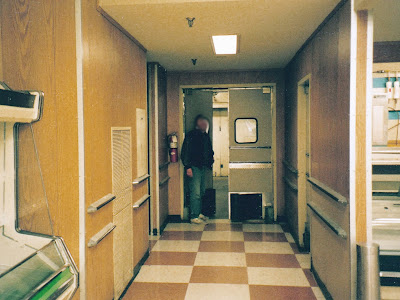 Now for a look at some of the back room areas... 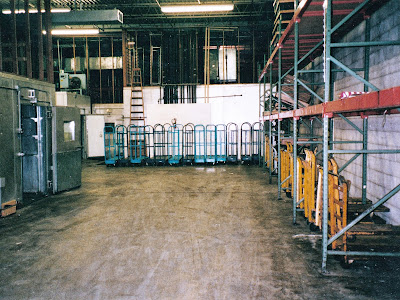 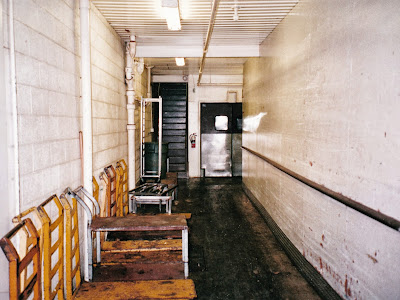 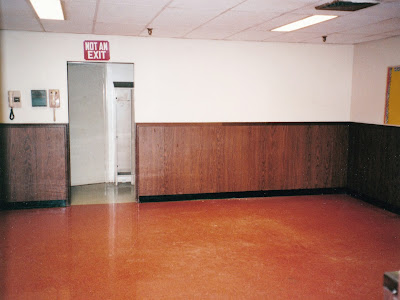 I believe this is the break room. The orange floor remains intact from day one! These were the same tiles used in the Deli and Meat Department for the 70's Colonial decor package. 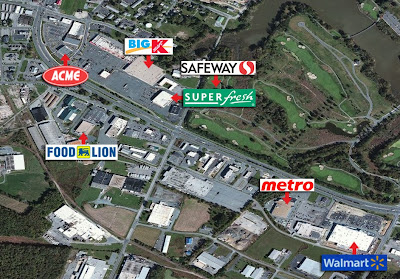 A look at the competition and former competition in the area. Satellite views are very limited with no up close views available. Kmart and Metro Food (not sure if that's the correct logo) both appear to be abandoned in this image. 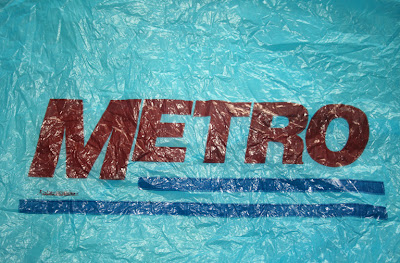 The correct Metro logo above sent in by Will. This is an old plastic bag from the store.

Update 9.26.13: Additional photos from Ben of Delaware. These were taken about a year ago... 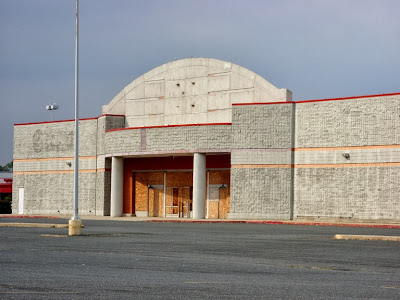 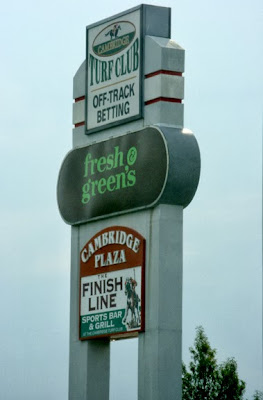 fresh & green's has taken over the former Super Fresh which closed back in 2011... 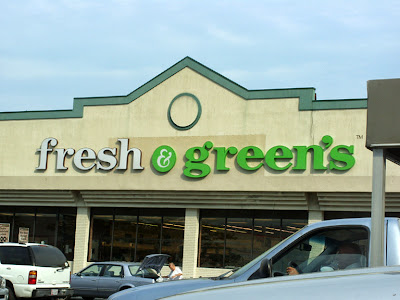 Back to the former Acme... 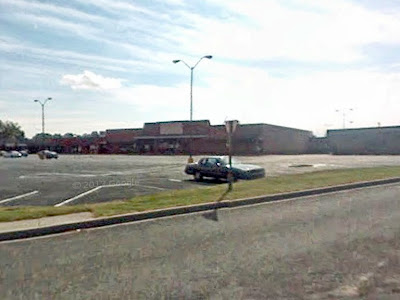 A screen grab from google maps. The Acme is still abandoned as of today. Not sure what the condition of the interior is at this point. If anyone is in the area and can get us some pictures, I'd love to add them to this post. 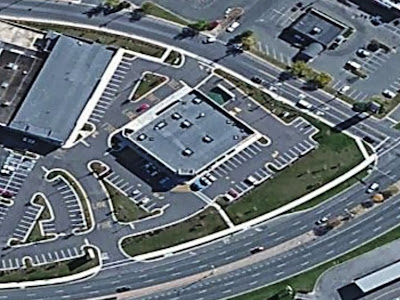 A more up-to-date view on Bing Maps shows a Walgreen's having been built on the site of the Acme. Ross K informed us in the comments that the Acme was torn down in 2009.

Thanks again to Dwayne for a trip back to the 80's!