Pick of the Day! 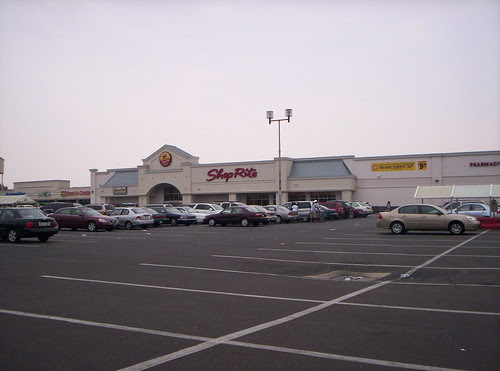 Image above courtesy of Josh Austin

For our second "Former Acme Pick of the Day", we'll be taking a look at this ShopRite located in Penrose Plaza. The store began as an Acme sometime back in the 70's. Views from the Historical Aerials website offer no clues as to the evolution of the store. Grassing fields in 1971 with the next available view in 2002 where the building looks much like it does today. The shopping center underwent a major expansion back in 1986 which included the addition of a Clover Department store which has since become a Kmart. The Acme was most likely remodeled around that time but there is no information available of it being expanded along with the rest of the center. My personal knowledge of this store is absolutely zero.

Now let's get to the very odd developments here. First off, the Acme received a significant remodel, both inside and out, sometime in the early 2000's. The Acme at 8200 Roosevelt Blvd, which you can see here, has a nearly identical facade. Secondly... just a few short years after investing heavily in this store, Acme bailed and sold to their most dreaded competitor ShopRite! As we have seen many times over, Acme takes every measure possible to prevent another supermarket from occupying one of it's former stores... most especially ShopRite! From the satellite views, I'm not seeing any nearby competition that could have prompted Acme to leave the location. The third odd development here requires a look inside...

Thanks to otterphoto for the pictures posted on flickr! Can you believe Acme left behind all of it's decor for ShopRite? And that ShopRite just left it all in place? Clearly some sort of agreement was worked out here between the bitter rivals. Why else would Acme just leave everything behind? At the very least, they would have pulled down the department signs around the store. Hopefully someone can add more to the story here in the commenting section...