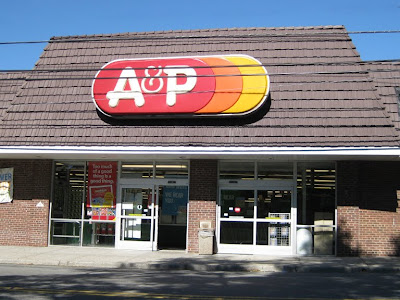 On August 13, A&P announced the closing of 25 stores. Among them, the oldest, and probably one of the smallest, A&P... located here in Maplewood New Jersey. This store has been operating for 68 years now and sadly has just about a month left to go.

Most of the announced closings are due to A&P and Pathmark overlapping each other in the same area. A&P purchased the ailing Pathmark chain back in 2007 and has been suffering huge losses ever since. The old Maplewood A&P is right next door to the South Orange Pathmark. They even share a parking lot! You'll believe it when you see it.

Here is the complete set of stores set to close on October 13:


A&P
Pathmark
Super Fresh
Waldbaum’s
And the news bad news keeps coming... the company is now exploring options to sell off it's Food Emporium division to raise cash and announced yesterday that it is selling 7 of it's Connecticut stores to Big Y Foods, Inc. as it retreats to it's core market area. 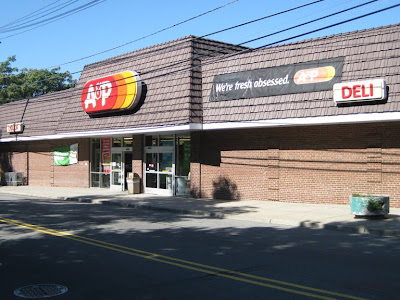 Is this the last street-front A&P? I would imagine it is. The building was originally half this size which will see down below. 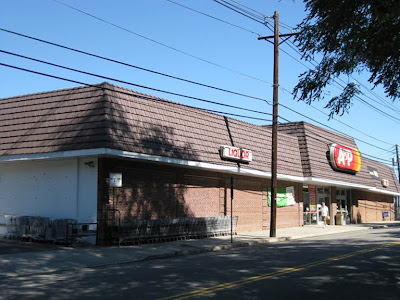 "Liquor" has probably played a large role in this outdated store lasting this long. That and it's pure convenience. Easy in. Easy out. 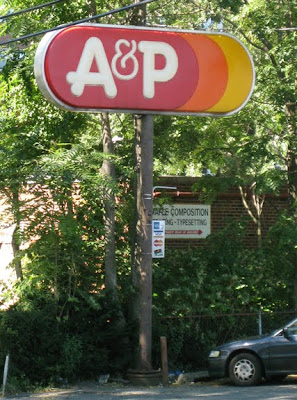 You just don't see these signs around much anymore. Still in great shape. 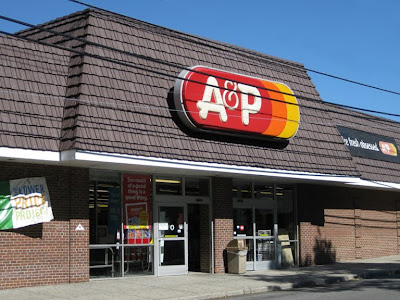 Let's take a step inside... 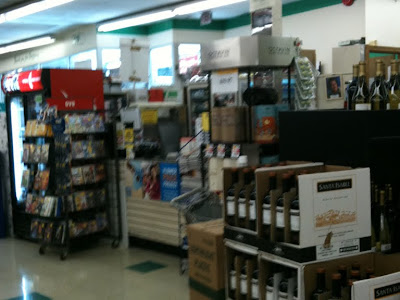 The entrance is in the center of the store. When you walk in, the checkout stands are to the right and Customer Service is tucked away on the left. You can see the small counter there next to the DVD racks. It was hard to spot. No signage and it's virtually buried behind displays.

The front corner of the store is where the liquor is located. Produce is in the back half of the left side...

It looks as though this store was remodeled in the 80's. I believe this may have been a decor package for the Sav-A-Center concept. I remember alot of A&P's becoming Sav-A-Centers while others remained A&P's but traded the old orange theme for a green theme. This may also be an early Super Fresh decor package. 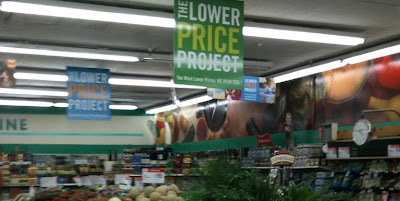 Big colorful pictures of food are used in this decor package throughout the store. For as old as this decor is, it doesn't look too terribly dated all these years later. This store is also quite clean for it's age although it could certainly use some freshing up.

I gotta say... it was fun exploring this store. The perimeter of the store has the most random selections of merchandise. Great effort has been put into filling every available inch of the store. Regular shoppers probably have it down pat but new shoppers must have a time finding things. 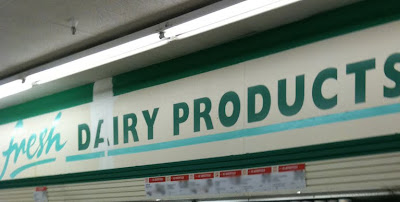 Dairy lines the back of the store. 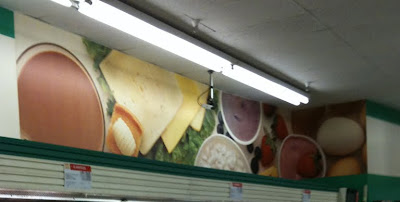 The Meat Department runs along the right wall. Aisle 10. Once extra wide with cases on both sides. Shelving has been put down the center of the aisle splitting the aisle in two. 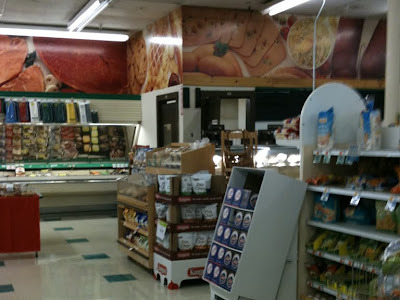 Check out the old school meat cases! One tier just waist high with mirrors lining the back wall! Wow, did that take me back a few decades. 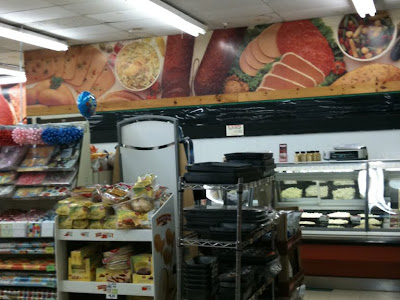 The Deli is here in the front corner. Like Customer Service it's nearly buried from view. You just have to follow the olive loaf to get there. Feels like the Deli was an after-thought. The cases are out in the open siting in front of that enclosed back room. There's no awning, drop ceiling or special lighting to signify this as a service department. If you didn't know there was a Deli here you would easily miss it.

Time to check out and head back outside... (I racked up some nice savings here. A&P seems to get such a bad wrap for just about everything... personally it's among my favorite stores. I live near two A&P "Fresh" stores which are among the nicest grocery stores around today. And I have absolutely no complaints about the pricing.) 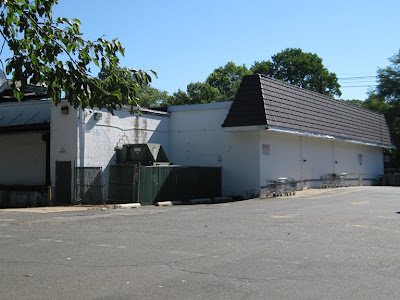 This half is the original building. 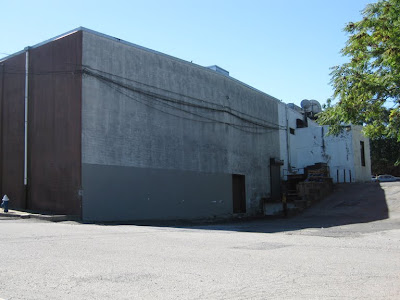 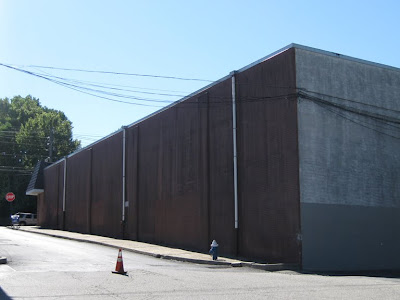 Come on down the hill and you turn left for A&P or turn right for Pathmark... 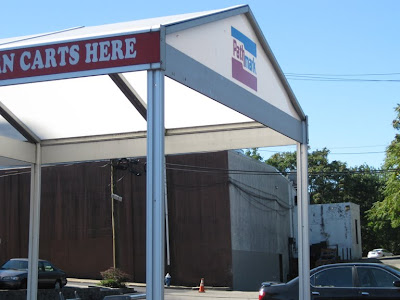 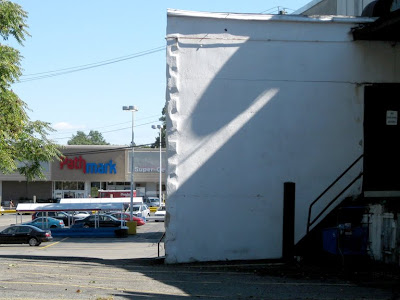 You can roll an A&P cart right to Pathmark's front door. 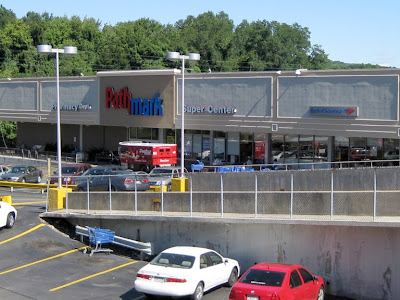 The Pathmark has an odd parking lot situation but the store itself is quite nice. Not huge but freshly remodeled. It's one of the few to get the "Go Fresh, Go Local" decor package which unfortunately bit the dust when A&P took over and plastered every inch of every Pathmark with the word "save". 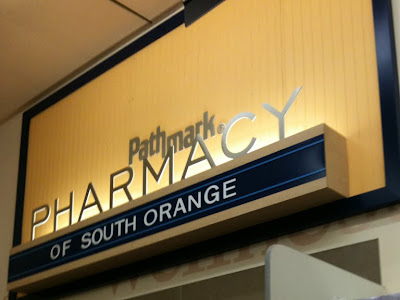 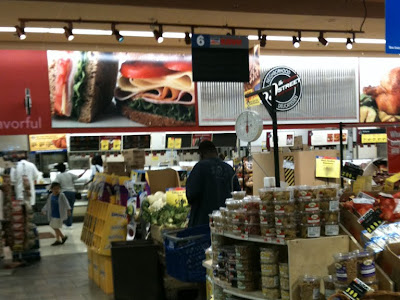 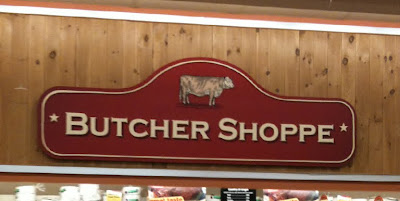 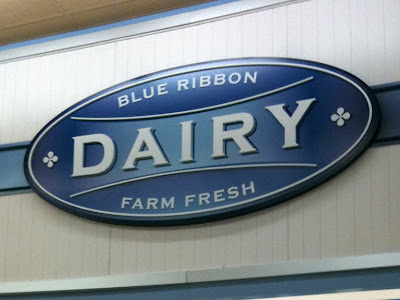 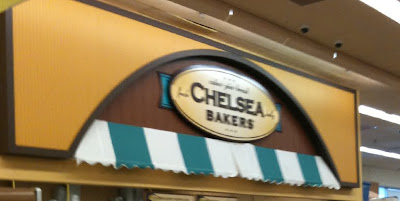 You can check out more pictures of Pathmark's "Go Fresh, Go Local" decor by clicking here.

Now for some aerials views of the situation... 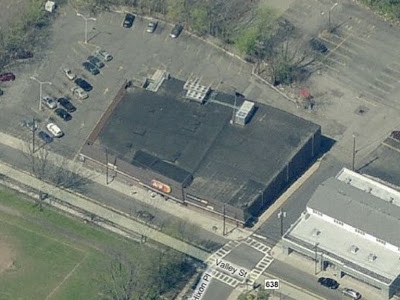 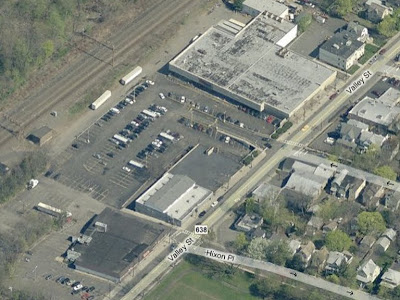 The Pathmark looks massive compared to the little A&P, yet for a Pathmark it's somewhat small.

Things were pretty much the same in 1987 as they are today.

As of 1979, the A&P had doubled in size and the Pathmark had arrived practically next door.

The original A&P with a PACKED parking lot! No Pathmark. 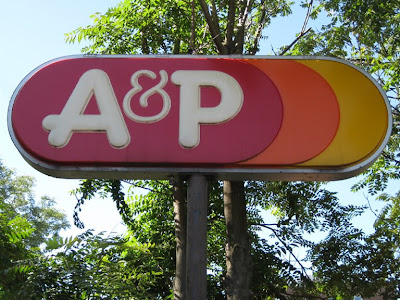 So Pathmark wins here at this location and sadly we must say goodbye to Maplewood A&P!