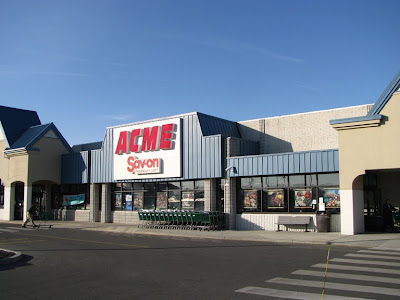 Tuckerton, New Jersey is not a shore resort type of town. It is located very close to the coast but it's a beach-less coast. For ocean fun you need to cross over to Long Beach Island which runs along the coast of Tuckerton. In fact, the Beach Haven store is just about straight out from the Tuckerton store. It may be quicker to swim to Beach Haven than to drive there. Especially on a hot summer Saturday afternoon. You'll get a look at how these areas relate to each other in the aerial shots down below. 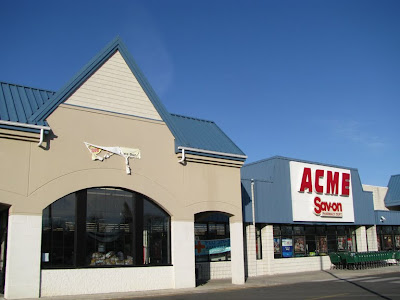 The "Knock Down Prices" sign has clearly been knocked out. Surprising to see that the sign has not been fixed considering how well the interior of this store is maintained. The exterior is among the strangest in the whole chain. The store has recently been expanded to the right side. This huge vestibule here on the left was added on as well. The center section with the sign is not new although I am guessing that it may have been added on during the 80's remodel. It appears a small addition was put on the front of the store at some point. You can see evidence of this on the outside as well as the inside. The blue paint is new. The awning was the old dark "Super Saver" awning color. 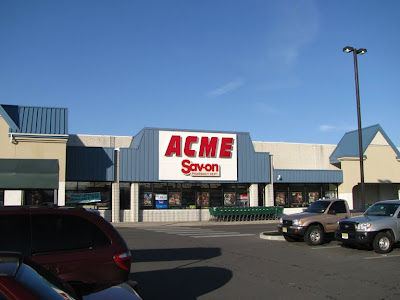 The Sav-on sign is a new addition. "Pharmacy" used to run along the edge of the awning along with "Food". 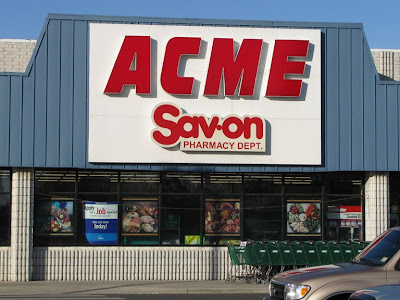 The food pictures in the window are usually paired up with the Albertson's Marketplace Decor. This store, however, has the ultra-deeeluxe no-expense-sparred Industrial Circus decor. It's unfortunate that the exterior signage has to be so ugly. The new addition in brighter white. I didn't the addition from the inside. It appeared that the transition between the old and new sections is seamless. 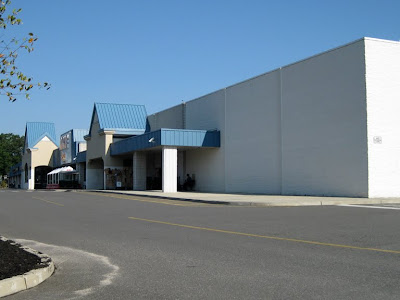 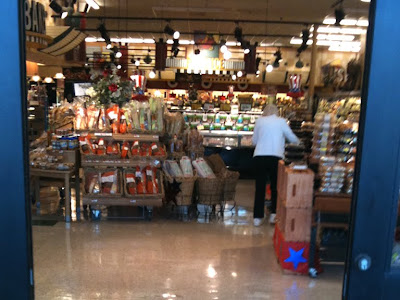 Every pic I took turned out blurry. Rob's are crystal clear. 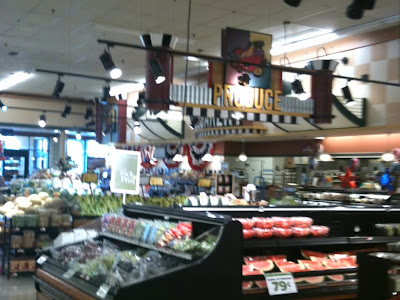 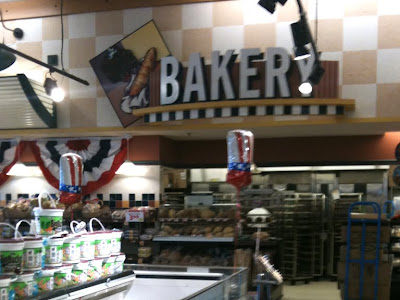 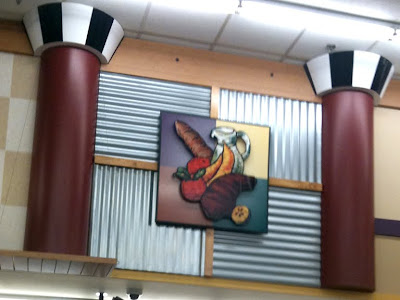 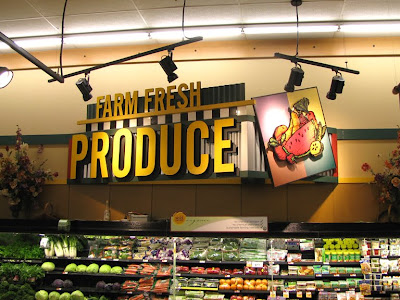 Some of these pictures have been shown before in the Decor Directory. But since I love this decor package so much, you're gonna see them again! To my surprise, I found out that this decor came to Acme courtesy of Albertson's. I had long thought this was the last decor packages from American Stores. 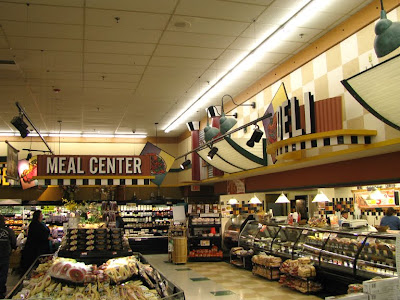 Whole lotta decor! Certianly not the trend these days were most stores are taking the "less is more" approach. Acme's latest look, Premium Fresh and Healthy, is very minimal. I would think this decor package was a bit on the expensive side only because there is soooo much crap up on the walls. 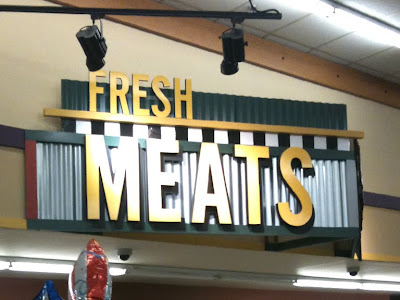 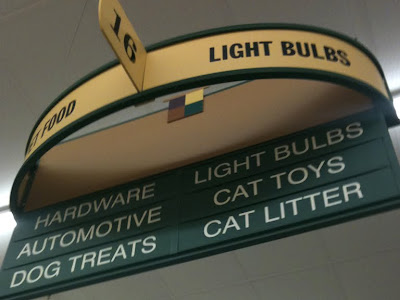 Floral gets the least exciting signage treatment in the whole store. 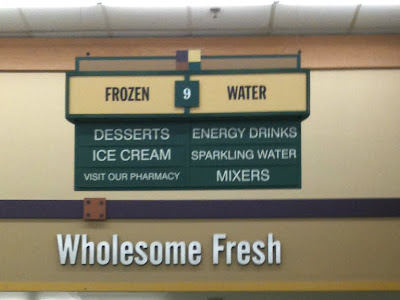 Back of the aisle marker hanging from the ceiling. Almost looks mounted to the rear wall in this shot. 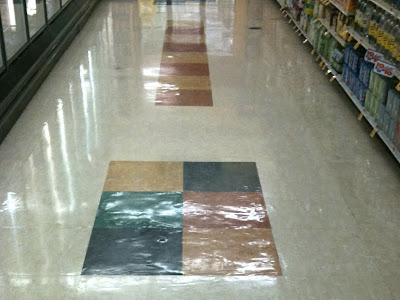 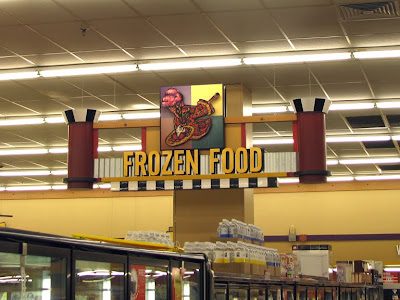 If this place ever gets remodeled again, I will be dumpster diving for this sign. 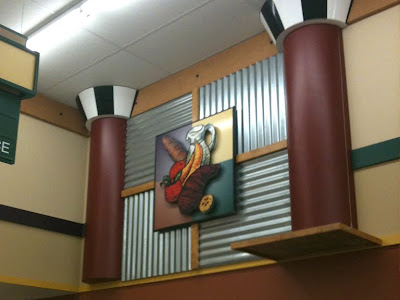 The platform under the one column is a very odd design element. Whoever designed this look of this decor must have had lot of fun doing it. 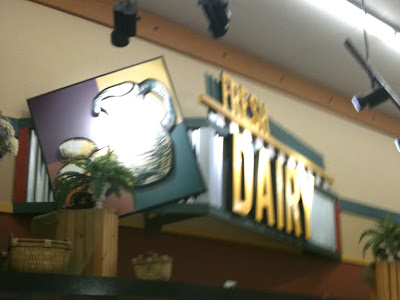 Gotta represent Dairy... even though it's blurry. I nearly got busted taking this shot but threw off suspicion when I grabbed the refrigerated hash browns I was looking for. (Wasn't looking for hash browns... just my next shot). 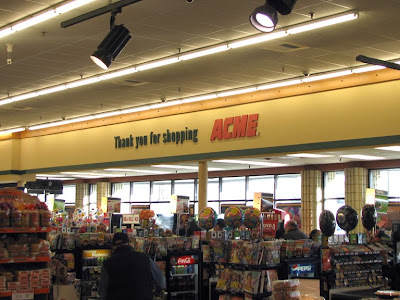 It looks as though the very front section was added on at some point over the years pushing the checkout stands out further. 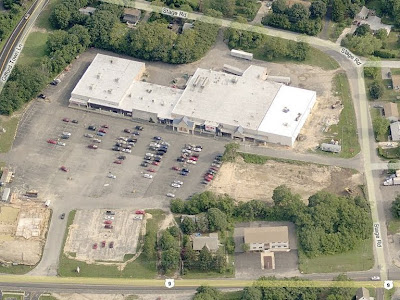 The satellite shots show the addition underway... which has me a bit confused. These shots are usually not more than 5 or 6 years old. So... was the Industrial Circus Decor already in place during the expansion and just swept through to the new section? Or... are these aerial shots from the late 90's-early 2000's when the addition and Industrial Circus Decor were both added? The addition and parking lot upgrades do not appear to be 10 years old.

New evidence submitted for your review...

The addition took place well after 2002. The next available year for viewing at HistoricAerials.com is 2006. That year's view shows the addition under construction, although the image is extremely blurry. So it does appear that the Industrial Circus decor was swept through to the new section instead of a full remodel being done inside.

The 2007 image from shows the addition has been completed but the parking lot upgrades are still underway. The lot has been expanded since the 2006 image but the rear of the store has yet to be paved here. 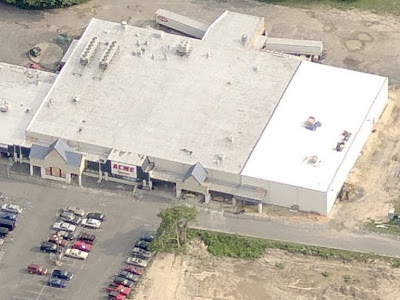 Here you can see the old awning before it was painted blue. The empty lot there would be converted into parking space. 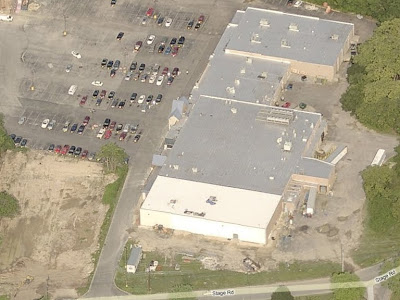 Old satellite photos indicate that the loading docks section was added on to the store during the 80's remodel. 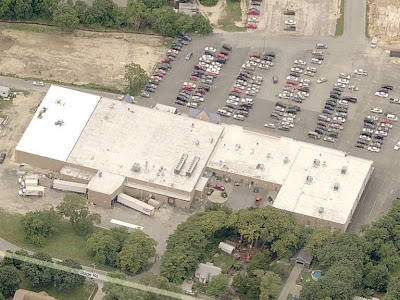 Check out the crowds this place gets! All indications point to this being an extremely successful Acme. 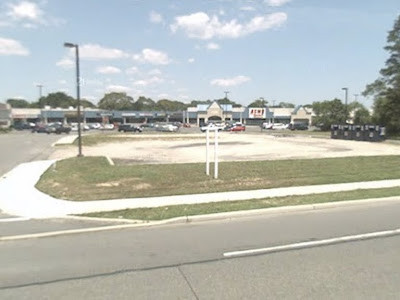 Google maps view from the street. Gives perspective at how far off the road the Acme is. 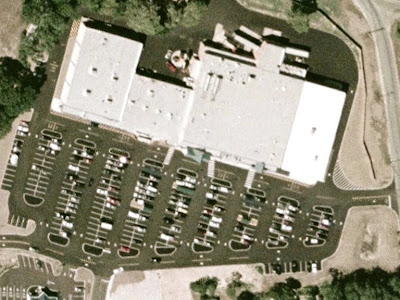 Renovations complete! The paring lot has been expanded and completely redone. 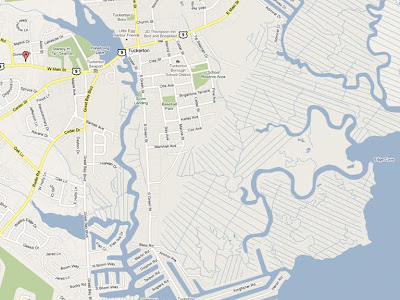 Can't walk to the water from this Acme. 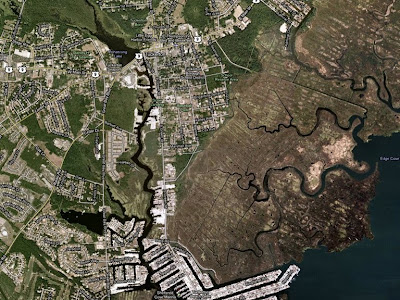 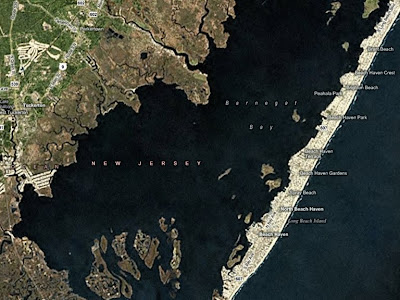 Tuckerton is in the upper left-hand corner. Long Beach Island there off the coast of NJ. Only one road leads to the Island and it's a good 15 North of Tuckerton. Getting down to Beach Haven on the Island could take a very long time due to the 35 mph hour speed limit on the Island and summer traffic. The Tuckerton Acme is commonly listed online as being in Little Egg Harbor Township.. for those trying to track down it's location.

UPDATE 9.24.10: Check out this really cool web page that shows the former Acmes of Tukerton. A former 50's store is just down the road from the present day Acme.