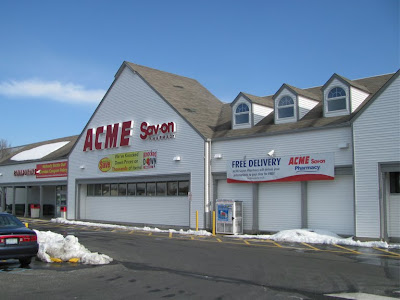 
The Seaville, NJ store looks to be a sister store of the former Elberon store of the last post. The front facades are very similar and both stores were built around the same time. Elberon was built in 1989. Not sure of the date of Seaville. The shopping center, however, was built around 1987 as we'll see down below in an old aerial image. Yet another late 80's store I was not aware of. Wished I had paid more attention to new construction back then when I had the opportunity. The mid to late 80's was an exciting era for Acme.

While the facade looks to be nearly identical to Elberon, it appears that this store was expanded out into the sidewalk space. A very common approach to increase the interior of older stores. Customer Service was often moved to these expanded areas in many Acmes. I haven't been to the Seaville store myself so I'm not sure what the addition is used for here. Time constraints and fuel funding prevent me from visiting every know Acme location on planet Earth. Thanks to Rob's contribution to Acme Style, we get to see lots of stores that I would not be able to bring you on my own. 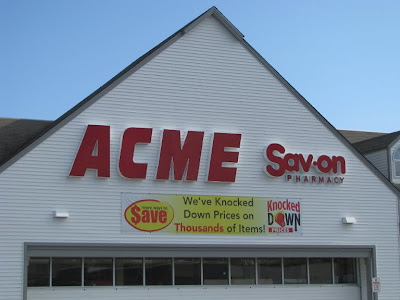 Nice to see a large "Knocked Down Prices" sign. Most stores have such small versions of this sign it's hard to imagine if customers even notice them. Personally I think Acme needs some serious graphic design help to make this signage more effective. This particular sign looks more like it belongs on an independent store than a major chain backed by the almighty SuperValu. 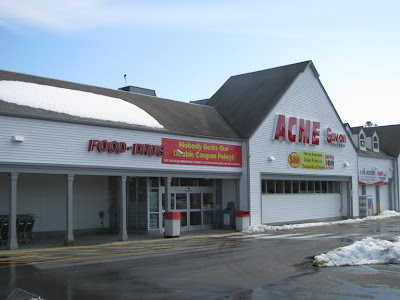 Lots of added signage on this particular Acme. Let's take a tour of the interior... 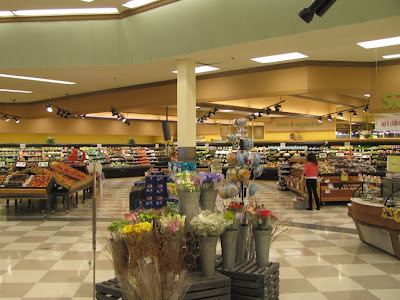 Produce Department with the old 80's Checkerboard floor still in place. Odd though that the Produce tiles are not green. You'll also notice the Checkerboard floor was done at an angle which was common in newly built 80's stores. Look closely in the back there... mirrors where the Produce windows would have been. This store probably never had windows due to the fact that the building lines up with another. I also believe these Produce windows weren't rolled out until the early 90's mega-stores. I refer to these 80's stores as the "super-store" format. The mirrors were probably put up during one of the remodels. 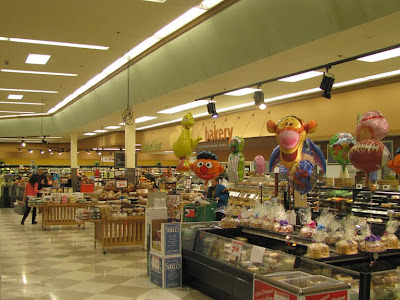 The decor here is left-over Albertson's Marketplace which has been upgraded to the Premium Fresh and Healthy look. So we're looking at a mish-mash of the 3 different decor packages in this shot. 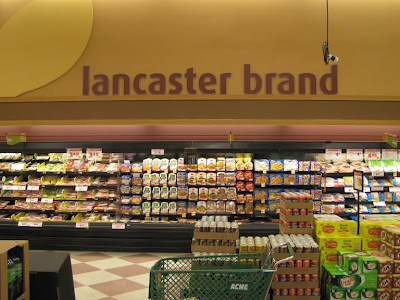 A massive Albertson's leaf up on the left. Some department signage appears to be a little too understated. The mix of the 2 decor packages here is not nearly as successful as in the Ocean City store... which isn't too far from this location. Check out the 80's Meat Department floor here. You can see more clearly how it was done at an angle as opposed to lining up with the back wall like in the 80's remodels. 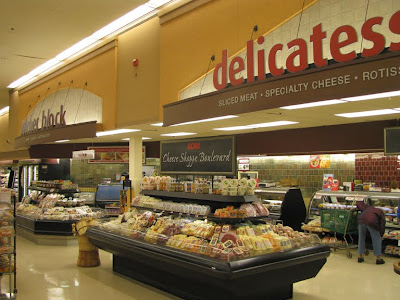 Doesn't look like this place got a very deluxe Albertson's Marketplace package. No blue light boxes in the service departments. The 80's floor was replaced in this section.

You may find this old article at Supermarket News an interesting read. Seaville is mentioned as being remolded and among the stores receiving new Sushi Departments in 1989. Back then, there were 180 Acmes. Today... 125. 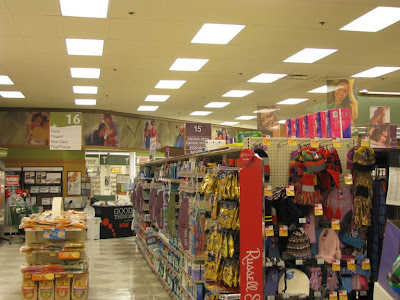 Pharmacy with interesting "lifestyle" photos on the wall and hanging from the ceiling. Brings some life to the otherwise dull decor here. Check out the different aisle markers. Perhaps 15 is a different design as it's part of the Health and Beauty aids department. 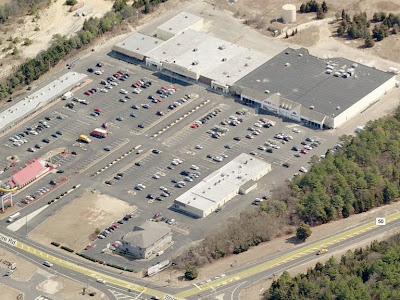 Full shot of the shopping center. The other large store is a Peebles. 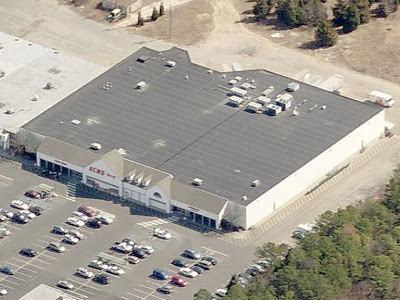 The Acme is located at 2087 Shore Road in either Seaville or Ocean View. Either way... you're pretty close to salt water here. 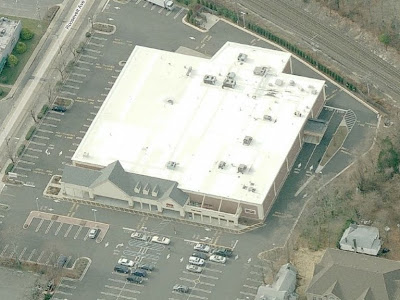 The Elberon store for comparison. This facade is much larger and I do believe this store was built a year or two after Seaville.

UPDATE 08.15.10: I have seen an old picture of the Seaville store. The awning sections stretching out from the entrance areas were roofless like the awning in the Elberon picture above. 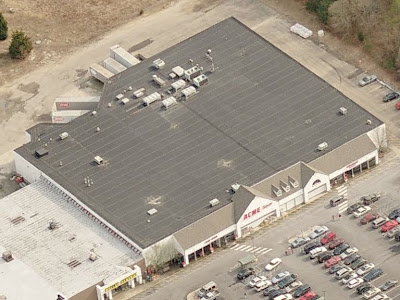 Looks like another very successful Jersey Shore Acme. Packed parking lot and lots of trailers in the back. 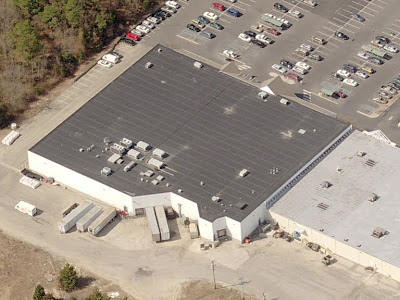 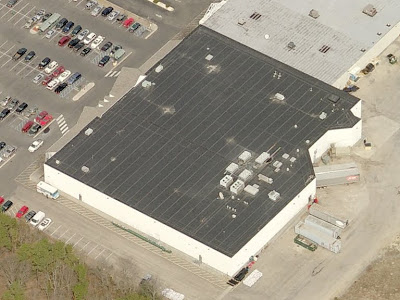 Now for some old aerial shots from HistoricAerials.com...

No major additions done to the store over the years.

The lot has been cleared for the Acme!

UPDATE 08.15.10: Several readers have sent word that the Peebles store was originally a Jamesway. 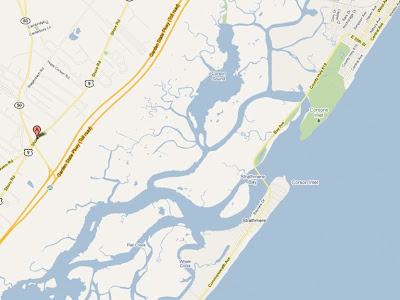 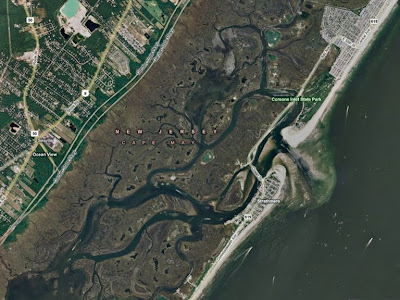 A bit of a drive to make to get to the beach from this Acme. The southern section of Ocean City can be seen in the upper right hand corner. The OC Acme is about 25 blocks north.