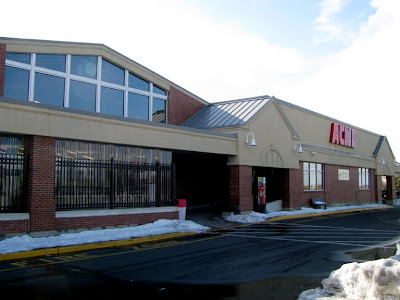 
The Acme in Ocean City, New Jersey, stands as one of the most fascinating pitched-roof conversions in the entire chain. The original store has been on this property for 43 years now. Back in January of 2000, the pitched-roof store was closed and construction for a massive expansion and remodel began. Final size: 33,250 square feet. The nearly-new store held it's grand reopening on June 16, 2000 at 7:00 am. 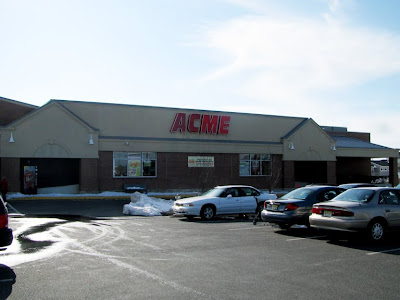 The brand-new section of the Acme is seen here. All the service departments were moved to the new addition. The pitched-roof half houses most of the grocery aisles and checkouts. 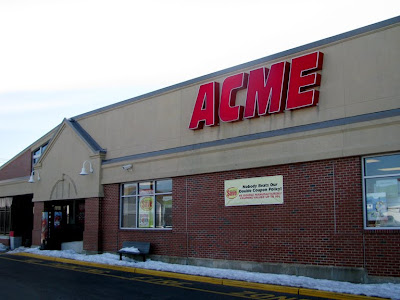 Ocean City is one of the very few pitched-roof conversions were the original building was not disguised with an awning. The conversions that occurred during the 80's remodels erased all evidence that the stores were ever pitched-roves.... with the exception of the back of the store. Princeton Junction, as seen here, is great example of the 80's conversions. 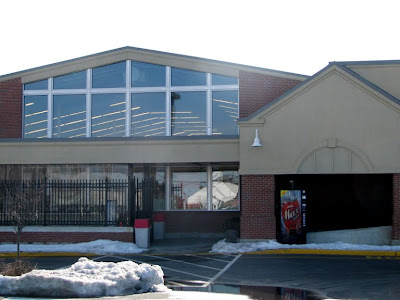 Not only did they not cover up the pitched-roof section, they left the ceiling inside completely intact! No drop ceiling. Granted, the facade of this store is a bit odd now, I do think preserving the original structure in this manner allows this Acme to remain a very unique store. It is nice seeing the old joining the new here.

Let's take a look inside... 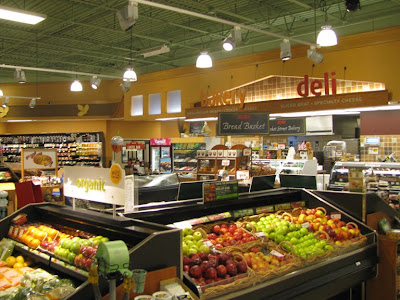 Check out the colors! Quite impressive indeed. During the 2000 expansion and remodel, the Alberston's Marketplace decor was put in. Recently the store was upgaded to the Premium Fresh and Healthy look in preparation for the new ShopRite opening in nearby Marmora. You can see the nuts and bolts of the Albertson's Marketplace decor still in place. Department lettering has been switched out and the iron-like sculptures over the blue boxes have been removed. One unfortunate addition... the Albertsons leaf planted up on the walls. I'm not a fan. 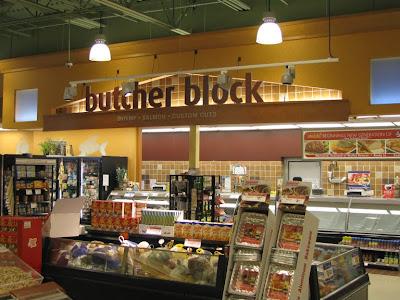 A lot of Acmes have been getting this upgrade in the last few years. This location has been one of the most successful upgrades I've seen. Earlier remodels were lacking in color and came across as cold and sterile. 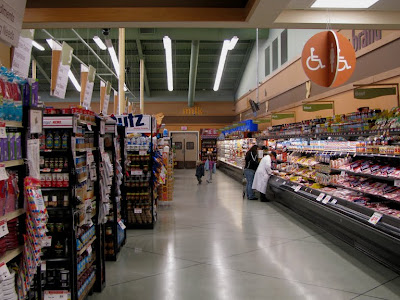 Looking out into the old pitched-roof building. 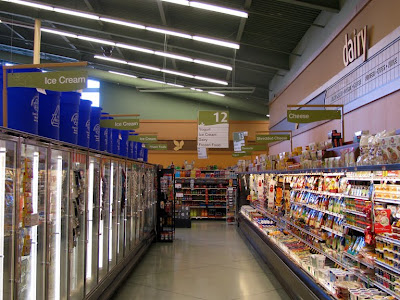 I believe the Dairy department is still in it's original location. The old entrance and exit would have been straight ahead and behind the original Customer Service Office... if we are to assume this had the layout of most pitched-roof stores.

Correction: The Dairy department is probably not in it's original location! The Meat Department shot above shows doors to the backroom along the current Dairy wall. Doors to the backrooms were along the Produce wall in the old pitched-roof stores. Dariy was always ran along the exterior wall of the building. 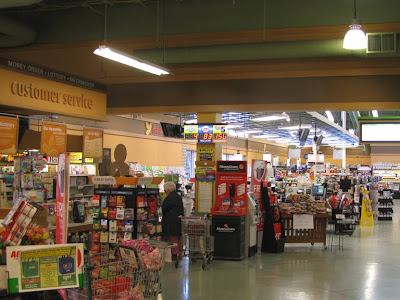 Front end of the store from the new into the old. 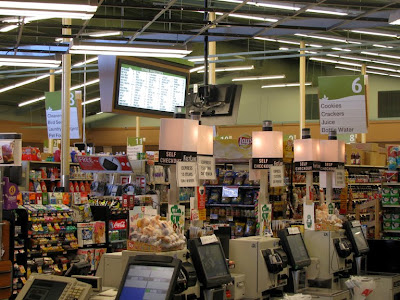 Nice to see the old pitched-roof store looking so good 43 years later! Too bad there weren't more of them around that have been so well cared for. 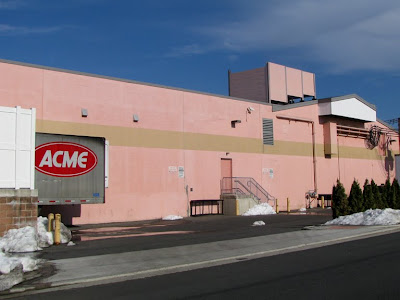 Now around to the back of the store... 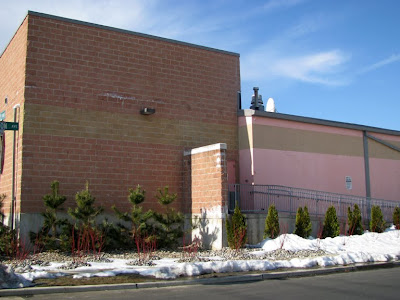 And up into the air… 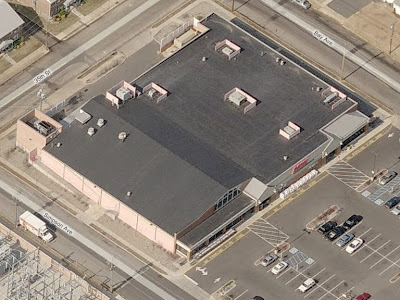 I have posted aerial shots of this store before when I first discovered it. Couldn't believe my eyes when I saw the conversion that was done here. 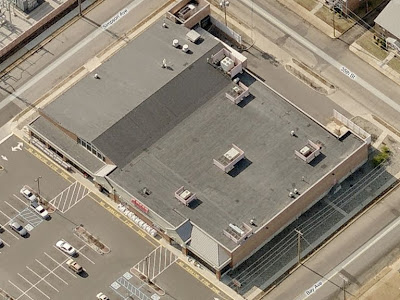 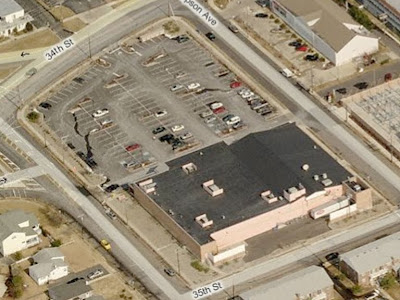 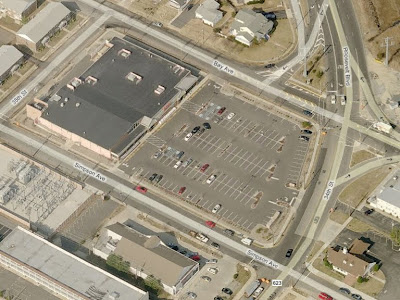 An interesting side note here... I read that the town reconfigured the entrances and exits to the parking lot in preparation of the Acme CLOSING when the new ShopRite opened in mid-2009. Rumors were that Wawa was interested in the location and the town was planning for the changes. Acme answered back by saying they had no plans for closing this store despite the competition coming from a new ShopRite. In fact, they were in the process of remodeling this store with the Premium Fresh and Healthy decor and we're very committed to keeping this location a success. 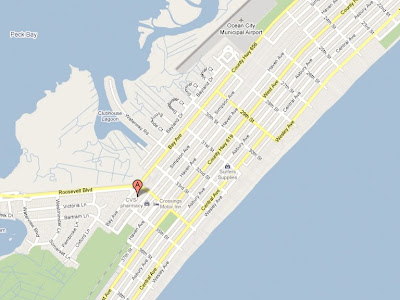 The Acme is located at 3428 Simpson Avenue, Ocean City, NJ, right at one of the main roads that leads to the Island. 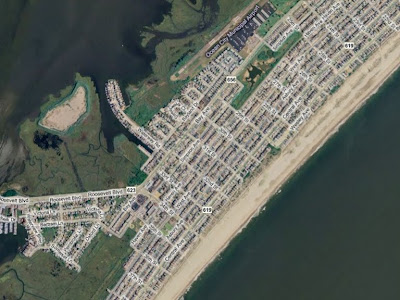 5 blocks in from the water.. for those keeping score. 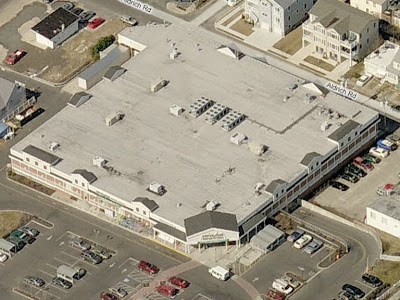 The other grocery store on the island... SuperFresh! Located about 25 blocks North of the Acme. If I have my stories straight... the original store was town down and this new one was built. 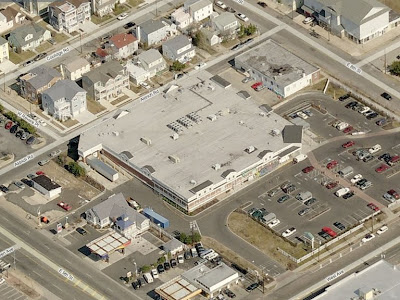 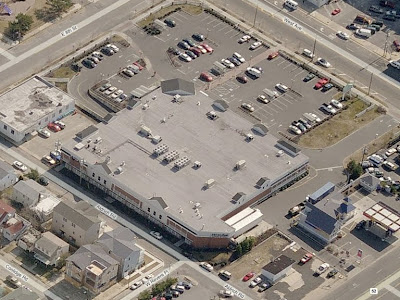 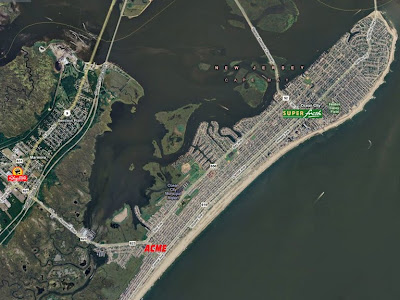 Here's a look at the grocery store situation in Ocean City. The ShopRite is not in Ocean City but must certainly be impacting the stores that are. (The ShopRite is so new, it's not showing up in satelite images of the area.) I'm curious to know how much longer the SuperFresh brand will be around for. Their numbers have dwindled extensively since A&P bought Pathmark. Most SuperFresh stores in the Philly area have been converted to Pathmark Sav-a-centers.
Posted by Acme Style