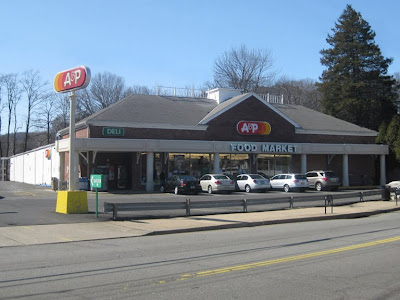 One of the very last "Centennial" A&P stores that is still open. This style of store was built in huge numbers from the mid 50's to the early 70's. A&P and Acme built similar stores throughout the 50's and 60's... generally 15,000 to 20,000 square feet and with the standard issue 8 aisle format. Both chains experienced explosive growth in the 50's and 60's building stores everywhere and anywhere they could. Acme stuck closely to the Northeast while A&P spread around the country with stores numbering in the thousands. The 70's proved to be a difficult decade for both chains. A&P saw it's number of stores drop in half by the 80's while Acme began shuttering it's older stores without buidling replacements. Both chains continue to struggle today with being caught between low priced stores like ShopRite and Giant and high-end chains like Wegman's and Whole Foods. 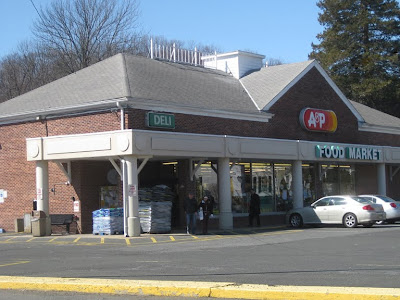 This location is missing the distinctive cupola and weather vane at the very center of the roof. This store looks to be the only one left still sporting the gates along the roof line. The "Centennial" awning and columns have been recovered with an unfortunate modern look. The Deli and Food Market signage may have been left over from the Sav-a-center look of the 80's when A&P ditched it's signature red and orange colors in favor of green. Lots of green. Everything painted green. Some stores even had a green A&P sign.
Click here to see a great picture on Groceteria.com of a Centennial store in it's original condition. 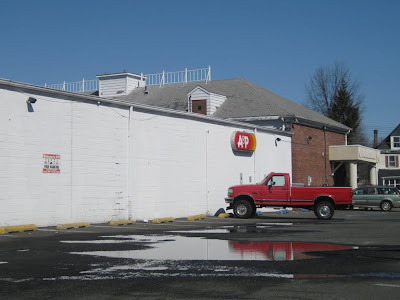 This store is unusually long for a Centennial model. 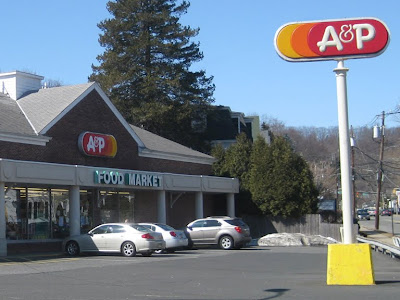 Surprising to see parking spots along the front of the store instead of a fire lane. This store was quite busy when I was there but it appeared that customers use it more as a convenience store than their weekly grocery shopping destination. 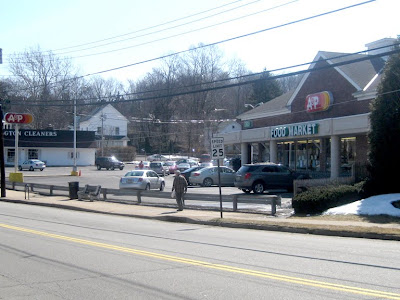 A good old fashioned neighborhood store. "Your great store just next door." Or something like that. 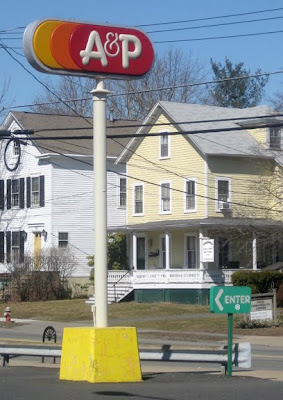 The old A&P sign with the newer "Sav-a-center" enter sign. Not saying that this was ever a Sav-a-center but it may have had the decor of one. 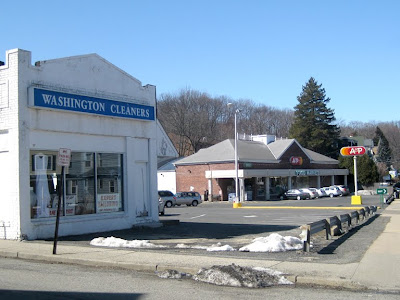 Now let's take a look inside... 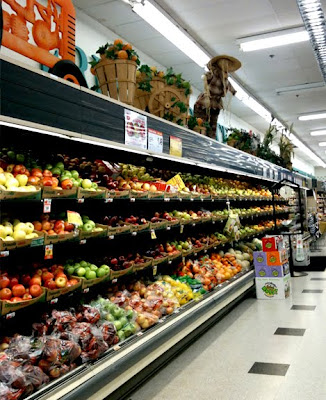 Decent selection of Produce. Even has a small salad bar. 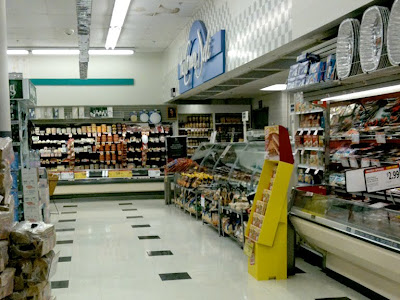 The interior is done in A&P's 90's decor. This look was replaced in more successful stores in the late 90's to early 2000's. You can see a sample of this look in the abandoned Bristol Super Fresh. A&P has since moved on to it's "fresh" market concept which is on it's third reinvention in about six years. 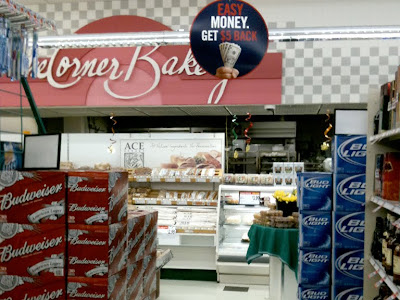 Very limited service Bakery. The store has entire aisle of alcohol which is oddly shared with the Health and Beauty aids aisle. 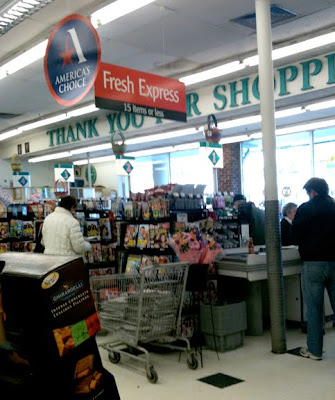 Front end of the store with 5 checkout lanes. The store office is over to the far left. You can see the round green clock mounted above the office if you look closely. The clock may have been left over from the Sav-a-center look from the 80's as are the entrance and exit signs out at the sreet. 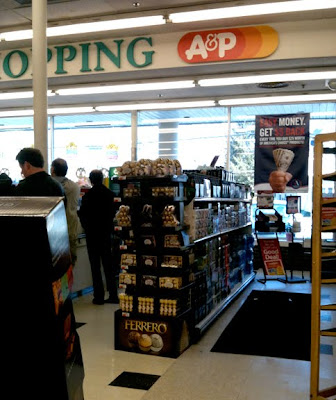 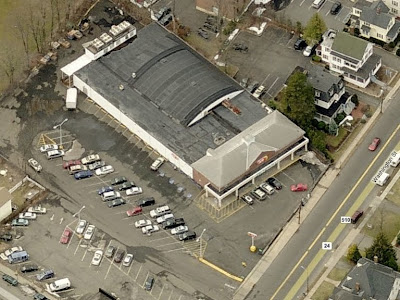 The original building was clearly added on to, possibly from three different sides. Not sure if this location started out as an A&P but it does appear that no additions were made after the Centennial front was added. 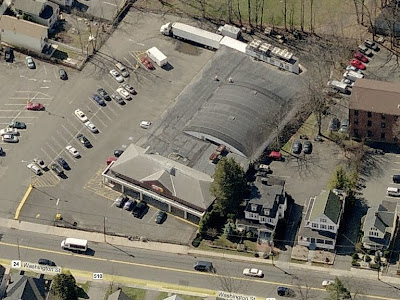 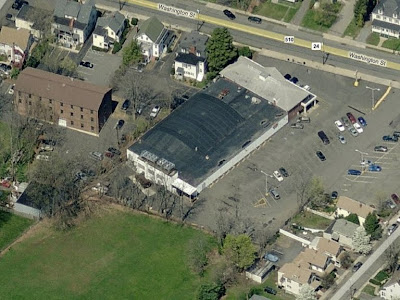 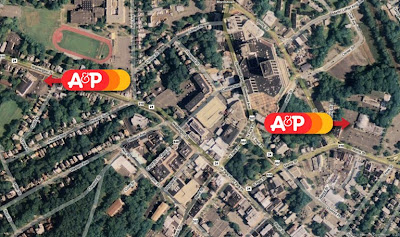 An aerial shot of Morristown shows just how close the town's two A&P's were located to each other. The former A&P store on the right can be seen close up down below... 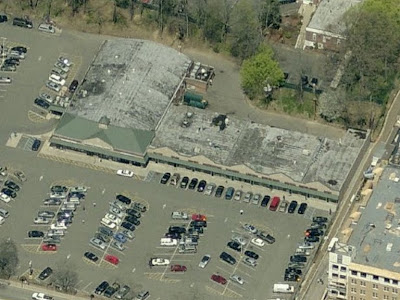 This former A&P is now subdivided into a Burger King and health food store.
Below are 3 other remaining Centennial stores with little alterations made to the original structures... 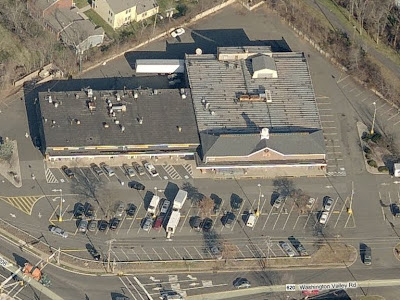 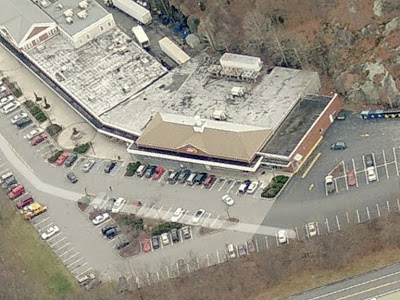 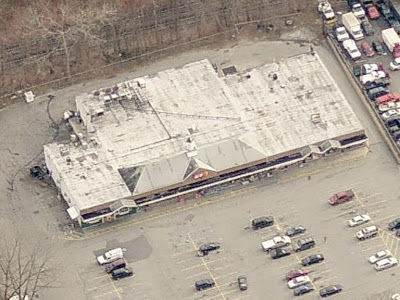