Acme's Trying To Get Better...

On March 12th, a comment came in to the latest discussions post about a memo that was addressed to the employees of each and every store. Changes were underway to improve Acme... yet again. It  seems Acme went drastically off course toward the end of 2016, at least that's what this Acme shopper observed. Out of control prices and deteriorating service. In recent weeks, I had left some comments on the blog which mentioned the troubling trends I was seeing. An Acme employee wrote in to share some behind-the-scenes information in to let me know drastic improvements were coming soon. Turns out that Jim Perkins, former chief or operations for the Easter Division, had returned after being transferred to the Texas division. last year The person who had replaced him was from Safeway and decided to run Acme as a Safeway clone which lead to higher prices and declining service. Fortunately, that person no longer is involved with Acme and Mr. Perkins is fast-tracking some huge improvements to get Acme back on track!


PRICES ARE ON THEIR WAY
BACK DOWN!

And not a moment too soon! The memo that was sent to stores listed several initiatives that Acme is undertaking to drive sales including the lowering of hundreds of "super sensitive items" around the store. These prices went into effect on March 3rd. I haven't necessarily seen any regular prices go down but I have noticed a HUGE increase sale items. In fact, on my last shopping trip to Acme, every single grocery and household item I purchased was on sale. Some of the items have very rarely been on sale in the past. It's doesn't' seem Acme intends to launch another price-lowering campaign but they are adding "Xtra Savings" shelf-tags around the store to call out the new savings. You can see some examples below. 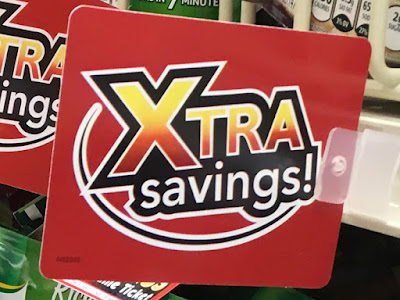 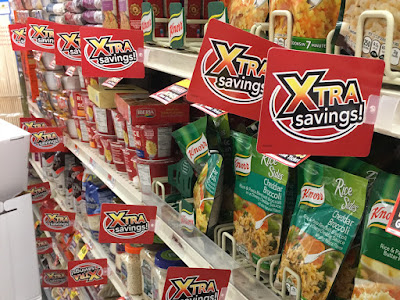 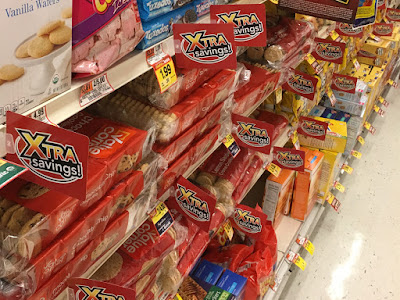 The "Something More for Less" shelf-tags, that used to number in the hundreds up and down every aisle, are thankfully gone. I tend to think that campaign ran it's course a while ago. The "Xtra" tags are bright, bold and more to the point. Walk up and down any aisle and you see there's no denying that Acme has just slashed prices.

While I do think all of this is a step in the right direction, Acme has one very serious problem on it's hands that does not seem to be getting addressed. It all began with the removal of the self-checkouts. Oh sure, they want the customers to have interactions with the employees. Sounds great on paper but what happens when their aren't nearly enough cashiers on duty to handle the customers? Everybody gets pissed off. Plain and simple. In most North Jersey stores I'm in, I find the FOUR self-checkouts that have been removed have been replaced by only two to three manned registers. A few weeks ago, I visited a bunch of converted stores for the blog on a Saturday afternoon... prime grocery shopping time. Every single store I was in, with the exception of one location, had only THREE registers open and most of those stores had long lines. In Elmwood Park, the lines were so bad at the three open registers, I gave up trying to buy a bottle of water and protein bar and just walked out. A few weeks ago I was in New Providence. TWO registers open with long lines and neither register was express. The Fort Lee store NEVER has an express register open when I'm in there.

Hey, don't take my word for it. Type in any North Jersey or New York Acme into Yelp and read the reviews. You will see endless complaints about the removal of the self-checkouts and the ridiculously long lines at store after store after store. You'll even find people leaving comments on Acme's very own Fresh Press Blog about the long lines and lack of open registers under posts that have nothing to do with service. There seems to be an overall lack of front-end management in these stores. Edgewater is the only Acme I know of that has a front-end manager on duty monitoring the lines. In other stores I'm in regularly, I have watched managers walk along the front-end completely unfazed by the insane lines at the 2 to 3 open registers. Wow, what a change from the days that I worked at Acme. Long lines = getting every employee who had the slightest clue about running a register ON a register. These days customers stand in frustratingly long lines with plenty of time think twice about ever coming back to Acme. My advice to Acme, which they'd never take but here goes... BRING BACK THE SELF CHECKOUTS!!!!
Posted by Acme Style