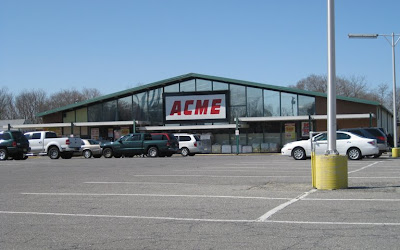 Here is... what I believe to be... the very last pitched-roof Acme still open for business. Other pitched-roof locations still exist but have had additions put on and renovations done that disguise their former distinct features. I think the only other pitched-roof store that is still open is in Cape May, NJ. But renovations to that store have covered up the glass facade. This store may be the only one to remain virtually intact since it first opened. 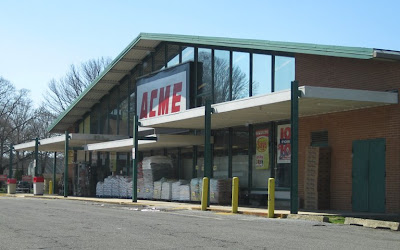 Neighborhood Acmes like this one have always offered all sorts of gardening and lawn supplies (as you can see lined up in front of the windows). Back in the 80's, Acme was famous for it's half-priced plant sales. Stores would be filled with plants just before the sale and would easily sell out in just a few days. The green doors to the right are for produce deliveries. 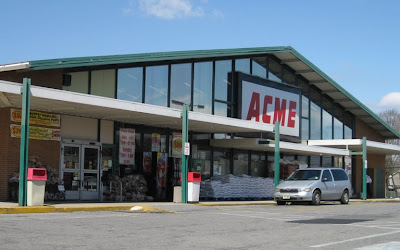 Just a couple of opaque panels have been put up over the entrance. Most pitched-roof stores had many more put in. You can see an example of this of the abandoned Acme in the NJ: Yardville post. There are only one set of doors to walk through when you enter. Once in the front doors you are completely in the store. A massive blast of air from above greets you as you walk in to keep the outside air out. 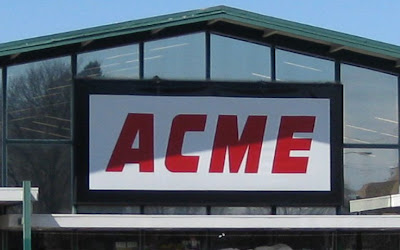 The outside sign appears to just be a canvas sheet pulled over the frame of the old fish-eye logo sign. I personally think this new logo looks much better with white letters on a red background. The parking lot signs are done that way as you can see in a photo down below. 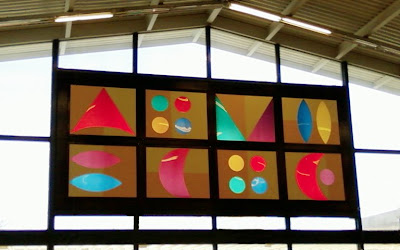 The greatest design feature ever for a grocery store? Why yes, yes it is! All pitched-roof Acmes had this design treatment on the inside. Just incredible. I was so excited to see this one still intact. Possibly the very last of it's kind. I believe I read somewhere that Acme had commissioned a well known artist in the 60's to design this sign. The areas around the abstract lettering are silver in color but appear brown here due to the sun shinning on the sign. I hope to get back to this store sometime after sunset to get more pictures. This sign would look very different when it's dark outside. 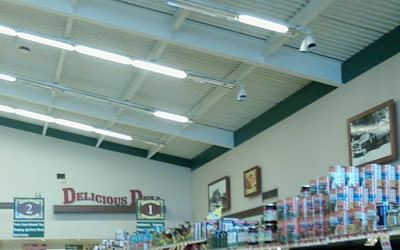 Here's an interior shot just to show the decor package this store has. Many smaller Acmes have this look. Old black and white photos of the town are hanging on the walls instead of department names. The Deli is the only department with it's name on the wall. The orangish picture on the right wall there said something like "Oven Fresh Bakery", yet this store has no fresh baked goods. The aisle signs say something like "Clayton New Jersey, Acme Markets" around the numbers. I believe those spot lights to the right have been there since the store first opened. They weren't on and I doubt they are used anymore. I have seen these above the produce departments in many pitched-roof stores. 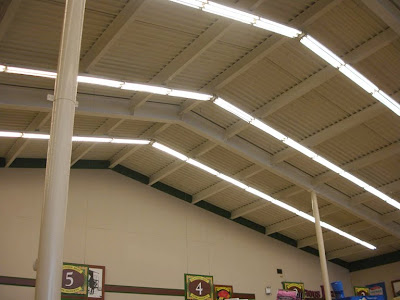 Update 10.25.11: Barry sent in this great shot of the interior roof. My interior shots are lacking since I was a little nervous taking pictures inside of stores in the blog's early days. I plan on getting back to Clayton for more extensive interior coverage. Clayton one of the all-time most visited posts on the blog. 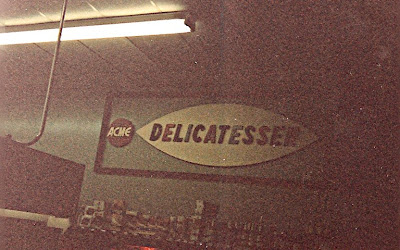 This amazing photo comes to Acme Style from Michael Lisicky. He took this picture of the Clayton store back in the 80's. I don't know if this store was remodeled later in the 80's along with most other Acmes or not. Hopefully someone familiar with this store can let us know. I will be posting other incredible pictures that Michael has sent in the near future. Stay tuned... 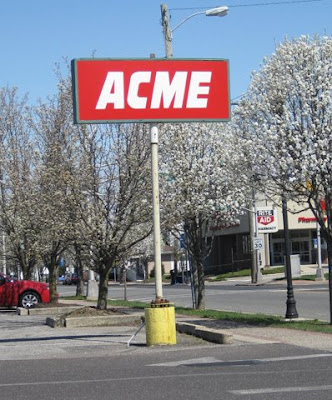 Isn't this a better look than the red letters on white? 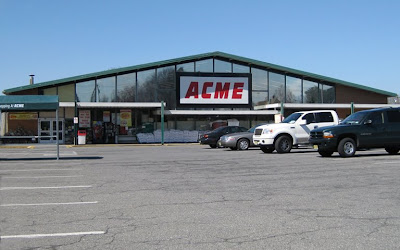 One final look at this classic Acme. And one final note... I spent about 30 minutes in this store, roaming all the aisles. It has been at least 10 years since I was in an Acme like this one. Just had to take it all in. I left the store incredibly impressed with how clean and well stocked it was. This location clearly has a dedicated team. There were alot of employees in the store getting it ready for what as hopefully going to be a very busy Saturday. 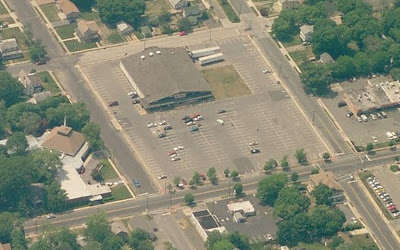 Here is a look from Live Maps. Interesting how large the property is compared to the size of the store. Would there ever be a need for that much parking? Wonder too if there was once a building next door where that area of grass is now and why Acme hasn't expanded this location.
Posted by Acme Style