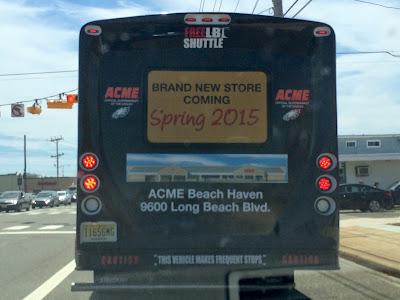 Plans to replace the Beach Haven store for next summer were announced back in April during the launch of Acme's "We're Back!" campaign. With the plans being on-again/off-again for years now, it still wasn't safe to bet on them actually happening. Well, Acme has now officially announced on their website that the current Beach Haven store will be replaced with a new store. dougbalt was even able to catch the announcement on the back of a bus! (A larger image of the new store can be seen at ProgressiveGrocer.com by click here.) Below is the video Acme posted on their website to finally make the news official. (Thanks to the numerous people who emailed the link to Acme Style). For full coverage of the Beach Haven store on Acme Style, please click here.