No pictures to share yet but we do have word on the look of the store... it's pretty much unchanged according to this comment left on the original post.

With The SIC Acme officially open, I decided to take a look and.... No décor changes!!!! everything just got a fresh coat of Paint!! 70's Corner Deli - Up!! just pained blue (looks like the 30th coat of paint if you look up close)70's Lancaster Brand is still along the back and is painted blue80's - 90's produce alcove signage is still up and also painted blue. There are also pictures along the walls of local sea isle similar to the Neighborhood Market décor. and lastly, they took down the Albertsons Marketplace aisle markers an replaced them with ugly black and white aisle markers which have no relation to acme whatsoever. Also, I think parts of the tile were even saved but I'm
not sure.

Hard to know if the department signage was painted blue before or after Sandy. Work is being done at the store when the picture below was taken in early December but it looks more like clearing out and drying out. Nice to know the last "Corner Deli" in the Acme chain will continue on! 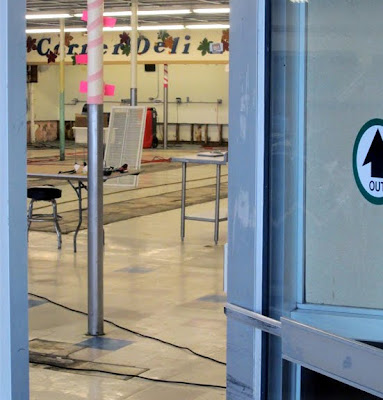 Anonymous mentions that the Albertston Marketplace aisle markers have been replaced with the black and white Premium Fresh and Healthy markers. Below are the former aisle markers... 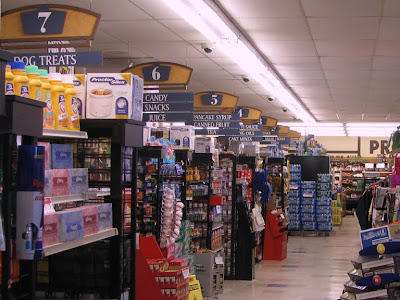 Replaced with aisle markers similar to the ones below. Both rounds of markers may have been taken out of stores that closed. 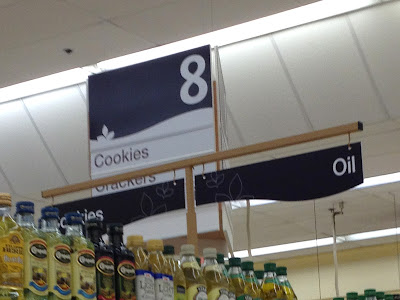 If pictures don't arrive sooner, I will be visiting both Sea Isle and Beach Haven in the early summer.

Update: "Anonymous" left a new comment saying that the new aisle markers in the Sea Isle City store are NOT the Premium Fresh and Health signs seen above.