Hope this post finds all of you well and with power. It has been an incredibly difficult week for those of us in New Jersey. Sandy took a huge toll that I don't think anyone could have imagined happening here. A couple of emails have come in asking if I knew anything about the conditions of the Acmes along the shore. An anonymous commenter posted a link on the Sea Isle City store post which sheds some light on the condition of the two most vulnerable Jersey Shore Acmes... Sea Isle City and Beach Haven on Long Beach Island. Both stores were severely damaged. With Sea Isle City being the most dated store in the whole chain, chances of it being repaired and reopened aren't good. The Beach Haven store was already scheduled to be replaced but those plans may be delayed with all the damage done to the island. Below are the two stores in question. You can click on their names to visit the original posts on the blog. For the article "Acme shore stores sacked by floodwaters" at philly.com, please click here. 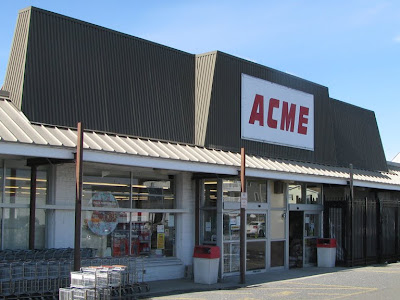 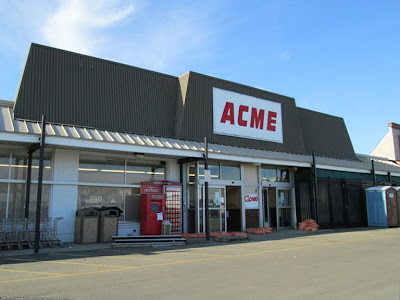 Michael L. paid the store a visit and sent in some pictures. The store should be reopened in a few weeks. Below you can see a portion of the interior. 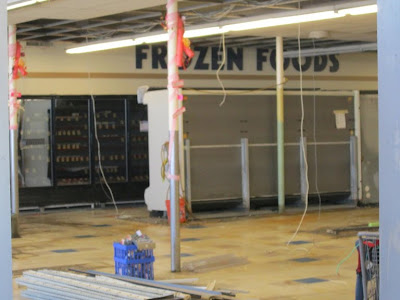 This store has one of the most fascinating interiors of any Acme in existence. You have some departments with the 90's Checkerboard Arch lettering. Others, like Lancaster Brand Meats and Corner Deli still sporting the 70's Colonial Decor lettering. The aisle markers, which have been taken down, were from the Albertsons Marketplace Decor package. Looks like the registers and all the shelving has been pulled out. The flooring here is very unique. It might have to go. Hard to tell from this picture but it is looking damaged towards the left side of the picture. 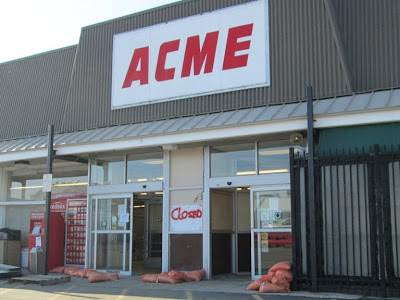 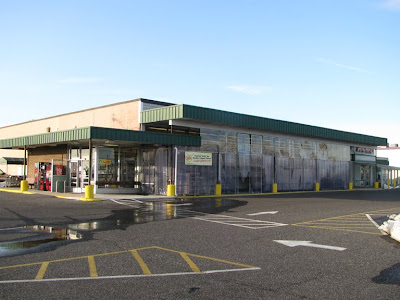