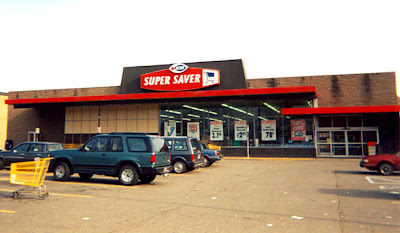 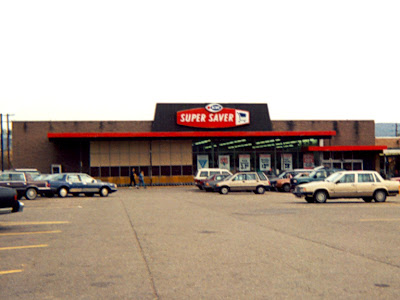 Acme Style would like to give a shout out to TW-Upstate NY...
this one's for you! 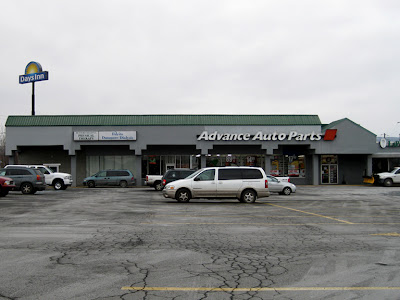 The Dunmore Acme opened back in 1961 and, like Clarks Summit, was among the 45 stores that were sold to Penn Traffic in September 1994. Does anyone know if Penn Traffic converted it to one of their banners or abandoned the location after the acquisition?

The building is now split between an Advance Auto Parts store and a doctor's office. The Days Inn sign was located behind the store during Acme's days as well (with an older version of the the logo). I photoshopped it out of the Acme pictures above because it was too distracting but now see I should have left it in one. Oh well... gotta keep these old Acmes looking as good as possible!

The two photos above have been matched up as closely as possible so you can see how the store has transformed into it's current state. The Acme entrance along with it's lower awning section is where the peaked section is today. Looks like the doors the Auto Parts store are in the same place as Acme's. The tall windows on the Acme have been reduced in size. The new awning erases all evidence that this building was ever an Acme. I didn't take any interior shots of the Auto Parts store...  the inside looks to have been mostly gutted and rebuilt. 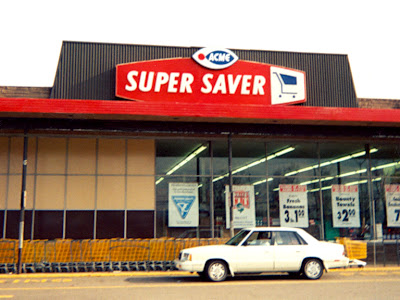 The Acme Super Saver sign! When the "Super Saver" concept was initially rolled out, the Acme logo was not included. Super Saver stores started out as discount stores and did not carry Acme branded products. As the allure of the Super Saver concept faded, stores were returned to more Acme-like supermarktes. (Thanks to Bill Haines for the history lesson on the Super Savers!) 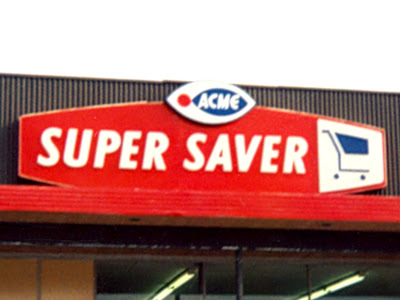 A closer look at the Super Save sign. Albertons resurrected this logo after purchasing American Stores. I believe it was used on stores in Florida. You can see the updated logo by clicking here. 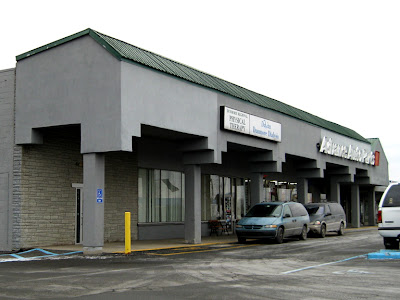 The Acme is almost unrecognizable from the front with the updated awning. It isn't until you walk along the sidewalk that you start seeing some remnants of the ol' Super Saver. 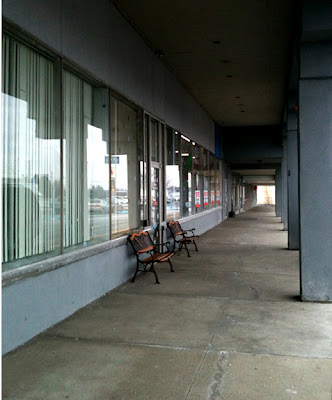 Hard to see here but the Acme flood lights along the awning appear to still be in place. 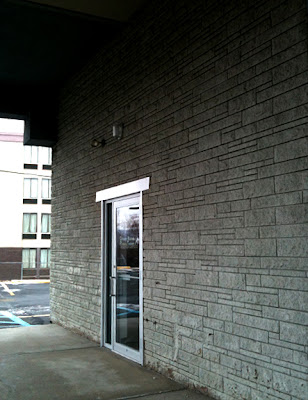 This door was added after Acme left. The brick work looks updated as well. 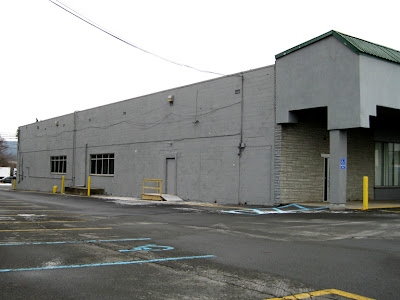 Not sure which side of the store the Produce department was located on. Most likely this side although stores with similar entrance configurations sometimes had the Produce aisle on the right side. TW could probably give us a detailed tour of the interior. 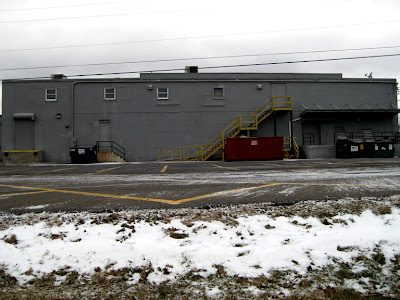 Around to the back... looks to have had a minimal amount of changes. A nice wooden staircase has been added for the second floor door which would not have been there in the Acme days. 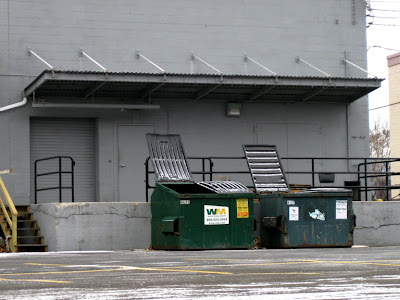 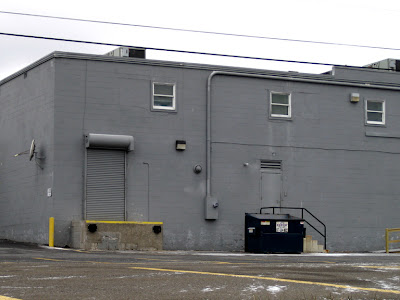 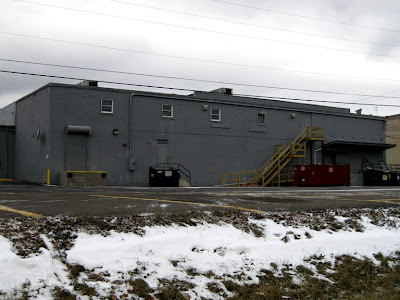 Now over to the neighbor's... 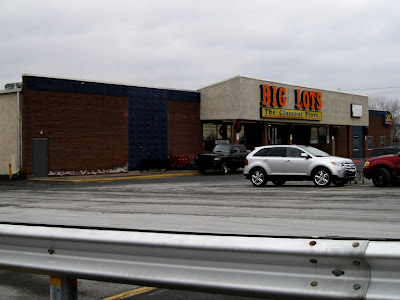 A Big Lots today but take a closer look and you'll see a Jamesway label scar! The store looks small from the front but extends pretty far back. There is access to basement levels stores from the rear. 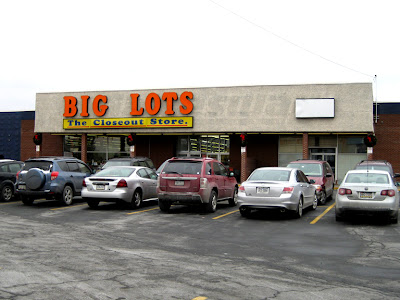 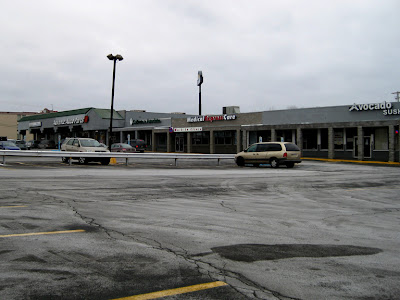 Looking up to the former Acme from the Jamesway parking lot... 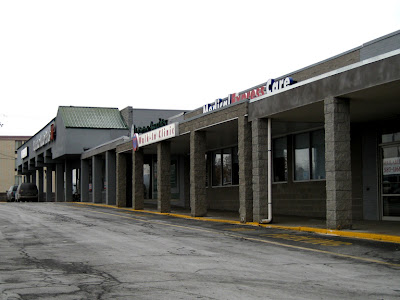 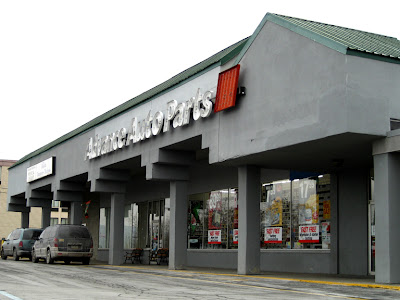 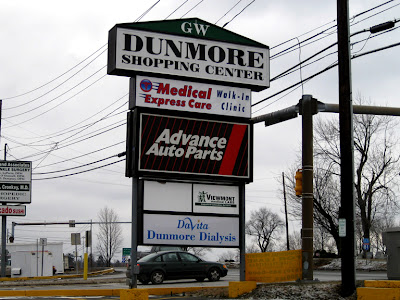 On to the aerial shots... 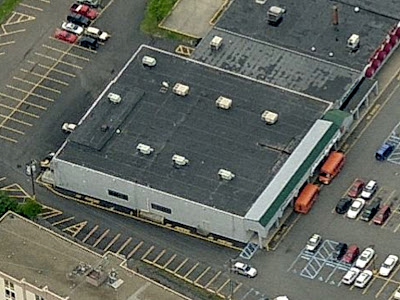 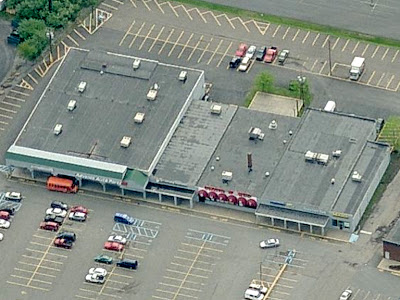 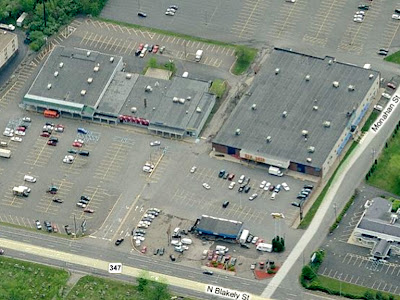 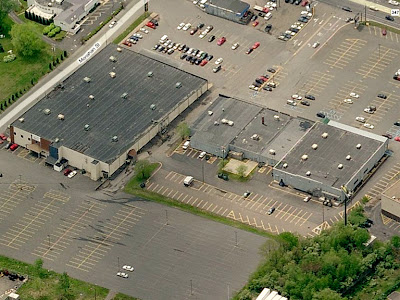 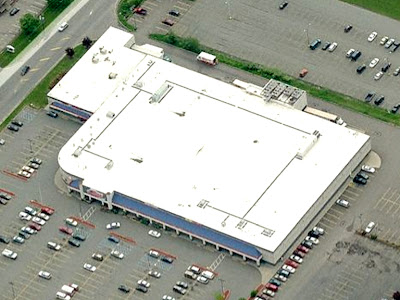 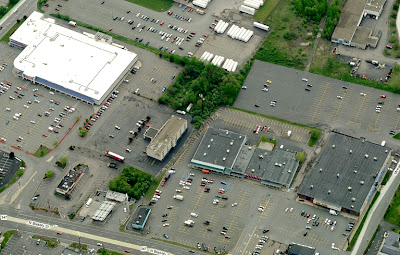