Blast from the past! Secaucus, New Jersey 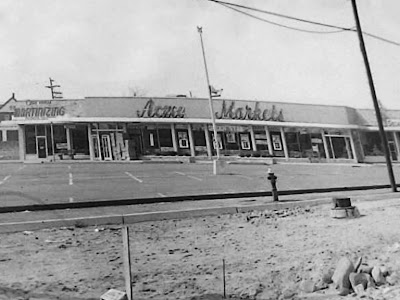 The picture above dates back to the late 50's/early 60's. The photo was sent in by smiley1999 along with some other classic photos which will be featured in future posts. The Secaucus store was covered on the blog back in October 2009 in an extensive 3 part series chronically it's demise. A recap of the Secaucus saga can be found at the bottom of this post. Directly below is a picture from the original post which was taken in the store's final days in 2004. 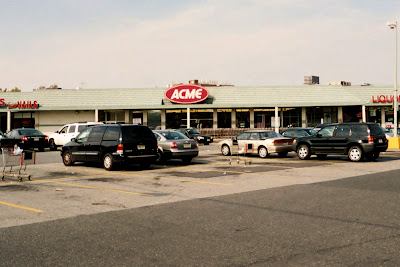 Although the store appears to have been enlarged over the years (looks wider in the 2004 shot than in the old black and white shot), I am quite certain it was not. The awning that was added since it's early days gives the illusion that the store had been expanded. The Acme building and it's relation to neighboring stores can be seen more clearly in the satellite images below. 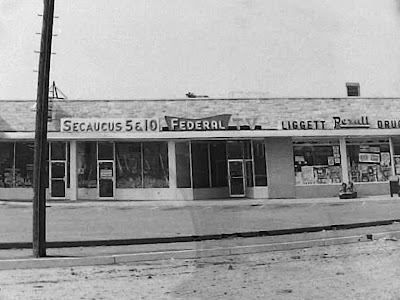 The image above are the stores to the right of the Acme. You can see a portion of the strip in the photo below as well circa 2004. 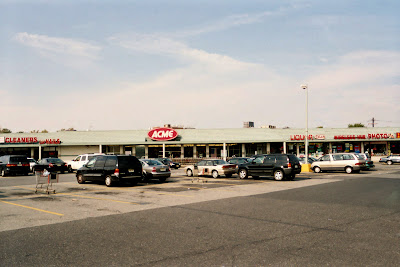 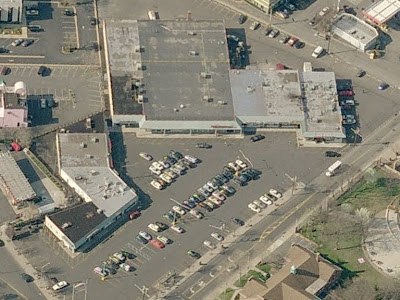 The Secaucus Acme is currently a CVS as shown above. A very nice farner's market has moved into the store to the left satisfying some of the grocery services that left this part of town when the Acme closed. 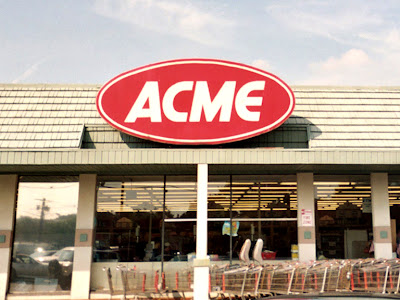 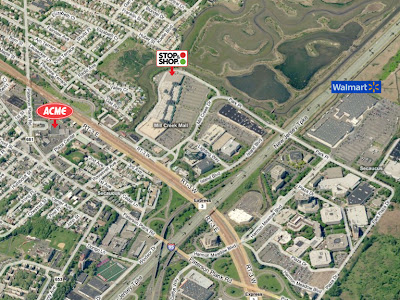 Now for a quick recap of the Secaucus Acme's demise... this was one of those rare occasions where the Acme wasn't interested in giving up. In fact, in the early 2000's Acme wanted to expanded and extensively remodel the Secaucus location which had been virtually untouched since it's 80's remodel. At that time it's only competition was a Stop and Shop (formally Edwards) across Route 3. The Walmart and Sam's Club had yet to come to town.

Acme submitted plans to the landlord which included an expansion into the neighboring stores. The landlord balked at Acme's plans and their intention of evicting other tenants. Acme followed up by submitting new plans which called for the renovations of their current building only. The landlord refused to consider the new plans and informed Acme that their lease would not be renewed.

Quite an unfortunate end to what could have been the beginning of a very successful chapter in the story of the Secaucus Acme. In the years since the Acme left, many other tenants have left as well, at some points leaving nearly half the center unoccupied. A reshuffling of tenants to make room for the Acme expansion would not have been impossible. It also would have been an opportunity for the landlord to fix up the shopping center which to this day is still in sad shape. The Stop and Shop has since closed as well, apparently unwilling to compete with Walmart. The Acme would have been the one supermarket that the town of Secaucus could access without going out on to Route 3.