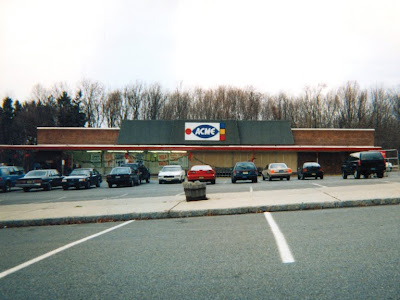 
Our final stop on the current North Jersey Tour... the Sparta Acme! (There will be more North Jersey stores in the future on Acme Style, but the time has come to move onto other regions.) The Sparta store has been one of the most requested stores for the blog. I decided to wait in hopes of one day getting pictures of how the store looked when it was still in business. Had no idea if pictures would ever become available. Thanks to Rob and his collection of late 90's Acme photos, I now have some great pictures of the Sparta store to share. 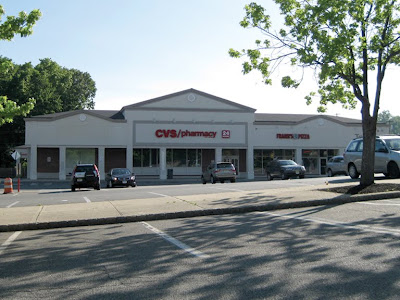 The Sparta Acme closed back in March of 2001 after a 43 year run. It sat abandoned for a few months and then was converted into a CVS along with a few other stores. There were many rumors floating around as to why Acme had left. Sales had been sliding for well over a decade but rumors were that Acme wasn't quite ready to close up shop. It was the landlord who put it an end to it all. Like so many other older Acme locations, the property was not maintained very well by the company and the landlord just simply wanted the Acme out of there. This was also around the same time that rumors were circulating about Kings taking over some North Jersey stores. The Sparta location seemed like an excellent candidate considering the income level of the town. Kings repsonded by saying they were not interested in the Sparta location. Who knows when CVS entered the picture. Could they have approached the landlord well before the Acme closed to express interest in the site? 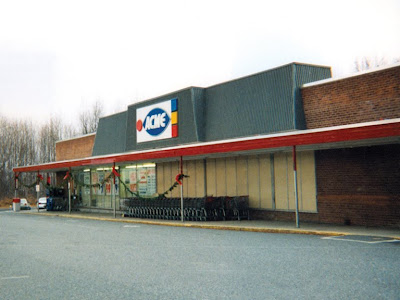 The Sparta Acme was in bad shape during the 70's. It sported the neon lit cursive logo across the awning. By the mid 70's several letters had fallen backwards and the neon lights were mostly broken. Fate would intervene in about 1978 when the store caught fire. The damage to the interior was minor but all merchandise had to be discarded. The Acme was shut down for 6 weeks for repairs and a remodel. It was at this time that the Produce alcove was added to the right side of the store. The deluxe version of the 70's Colonial Decor was also added. The "SuperSaver" awning was put up on the store along with the fish-eye logo.

The Sparta Acme did manage to stay in considerably good shape over the years when compared to other old Acmes of the time. The store was not remodeled during the 80's even though most other stores in the area were. The Sparta Acme kinda got the last laugh by outlasting some of the 80's remodels like the Succasunna, East Rutherford and Lodi stores. It also outlasted tons of the 80's remodels in Pennsylvania .

The 70's decor lasted all the way through the late 90's when the Convenience Store decor was put up in it's place. The company announced that Sparta was becoming the test store for the new Convenience Store format. It's nearly impossible to believe what this format entailed. They took the Sparta store... which was about 17,000 square feet... and removed 25% of the store's shelving. All shelves along the front of the store were taken out and the first 3 aisles where shorted to line up with the rest of the aisles... which were already too short. Dairy and Frozen were expanded slightly only to kill more grocery shelving space. "New" cases, which were actually used cases from closed stores, were put in around the store. The newly installed Produce cases did not reach to the corner of the department leaving unsightly pipes exposed. Health and Beauty Aids were virtually eliminated as was general merchandise. Now here's the big surprise... the format failed. Sales continued to fall. 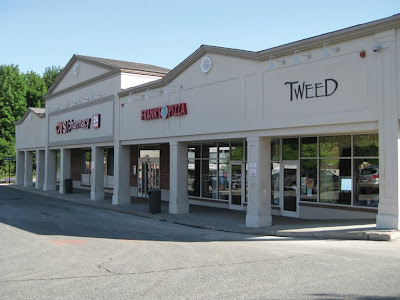 The property has improved dramatically since the Acme left. The new facade almost looks like an Acme upgrade like they have done to other locations. It is not. 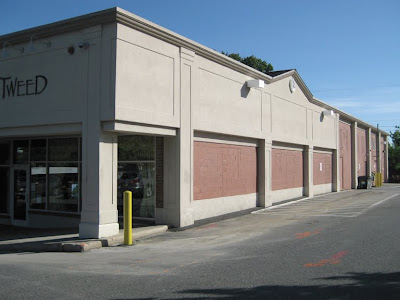 We can see some interesting scars left from the Acme along the side of the building. 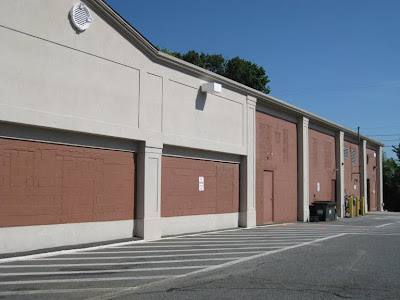 The outline for the old Produce door in near the front of the building. This was sealed over during the 70's remodel to make room for the Produce alcove. The door was moved to the next section down. You can see the outline there as well. The working door in the following section was added after the Acme left. 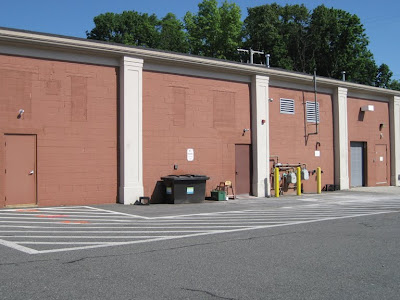 You can clearly see the were the Acme breakroom windows and employee bathroom windows were located on the second level. Grocery receiving was just one door all the way to the back. No dock. No awning. This was a bare bones Acme even it's early years. 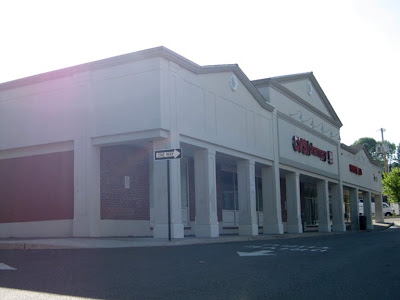 The sun does not always cooperate for these photo shoots! 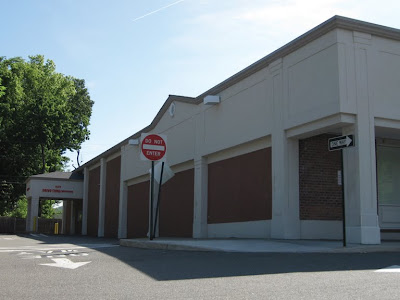 The old Acme entrance and exit was located at the side of the building right up by the front corner. The awning extended over the sidewalk area. CVS added a drive-up window to the back which was the old dairy and frozen receiving room. 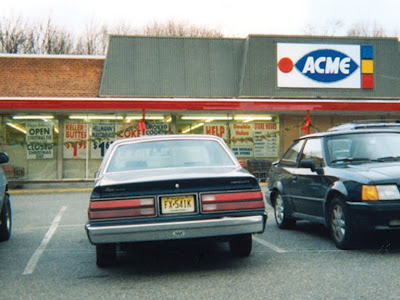 A close-up look of the sale signs... not the Chevy. You can see the shelving still located at the front of the store right behind the windows. 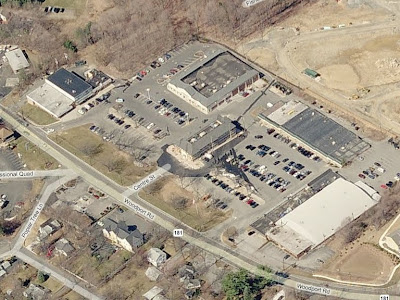 Interesting aerial shot here... you can see the land behind the Acme being cleared out for a housing development which is now finished. The project started well after the Acme was gone. Back in the 80's the company evaluated options for expanding the store. Turned out there were none. Expansion to the rear of the store was not an option as the land was privately owned and not for sale. An addition to the right side of the store seemed possible but that too was not an option due to the shopping center's septic system being located under this area. Bottom line: no room to grow.

Now let's take a look at the competition in Sparta... 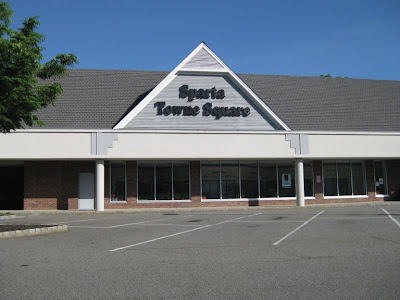 Sparta used to be a 3 grocery store town. Acme, A&P and Grand Union. The Grand Union arrived back in the 70's and although it was more than twice the size of the two other stores, it failed to catch on in it's early days.

This is the former A&P located in the dead center part of town. It closed back in the mid-90's and was converted to the town's post office. The A&P took a bigger hit from the Grand Union 80's remodel than the Acme did. Plus the A&P was the smallest of all three stores in Sparta. We'll get to the interesting details of the Grand Union in just a moment. 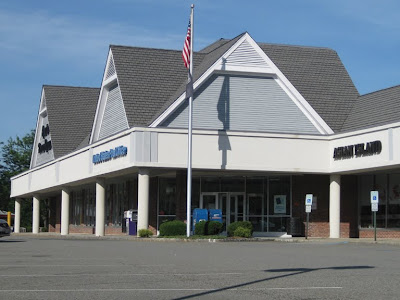 The A&P was originally a Centennial styled store but sometime in the 70's or early 80's the roof was covered over by a more modern treatment. The new roof was similar to the New Providence A&P which you can see by clicking here. 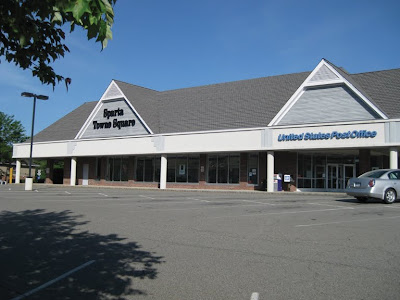 The roof was redone for the conversion to the Post Office. 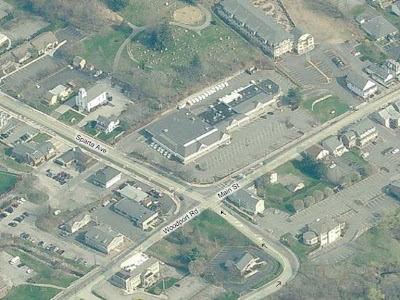 Like the Acme, the A&P had no chance for expansion. In the 90's, A&P was shopping for a new location in Sparta along the new Rt. 517 extension. They were turned down due to environmental concerns. There were rumors years later that Acme was interested in building a new store in the same area but they too were turned down. But when Stop and Shop (currently in the old Grand Union location) came asking for property for a new store, guess what happened.... APPROVED!

Speaking of the Stop and Shop/former Grand Union... 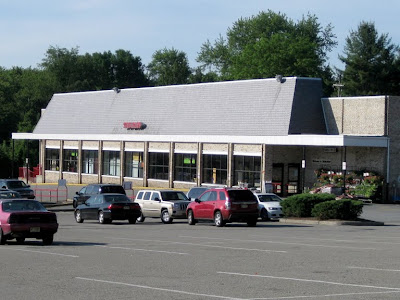 It hasn't changed a bit from the extensive 80's remodel except for the pathetically small sign now on the front of the building. 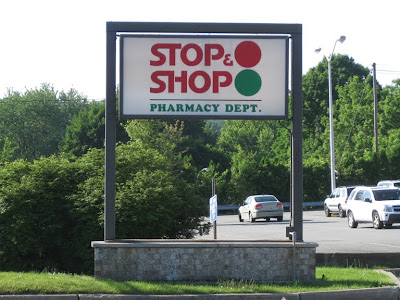 So let's back up for a few minutes here.... the Grand Union arrived in Sparta sometime in the 70's. A huge new store built up at the edge of "downtown". The Acme and A&P were institutions at this point and the Grand Union did little to harm their business. It was also during these years that the Grand Union chain was in trouble financially. Several times vendors stopped supplying stores with merchandise which didn't help the Sparta Grand Union one bit. The company also went through a round of bankruptcy. It was during this time that the Grand Union approached Acme and offered to sell them this location. Acme turned them down which would prove to be a monumental mistake.

As the years went by Grand Union pulled itself together. The Sparta store started to attract more shoppers. A massive condominium complex built nearby certainly didn't hurt business. Fast forward to 1988 when the Grand Union began a multi-million dollar renovation of the store. The store went from a very plain 70's styled grocery store to the most modern and deluxe supermarket in the entire area. The newly remodeled store attracted shoppers from all surrounding towns pushing it's sales through the roof. I am guessing it was doing over a million a week for years after the remodel. 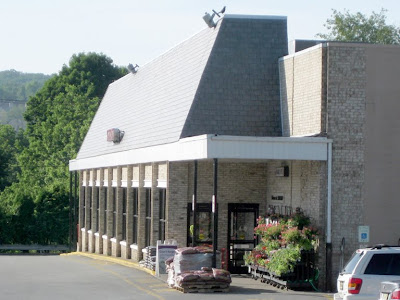 The very front of the store, with the entrances and exits, was added on during the 80's remodel. The interior was completely gutted with new full-service Bakery and Seafood departments added. Grand Union's signature salad bar was also put in... one of the best grocery store salad bars to ever exist. Sad that the entire chain is gone today. 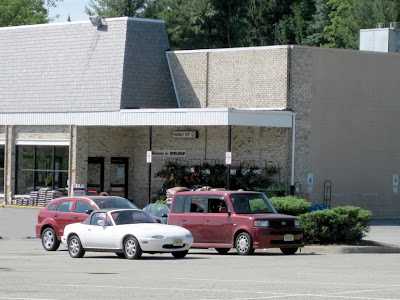 The old entrances were located at the front corner. Two separate doors next to each other both lead inside. The exit was located further down by the old checkouts. 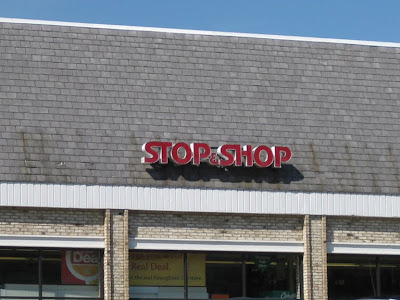 Scars from the old Grand Union sign still visible. The Stop and Shop sign may be on the small side due to new signage regulations in Sparta. At least I hope so cause this is one sad looking sign. 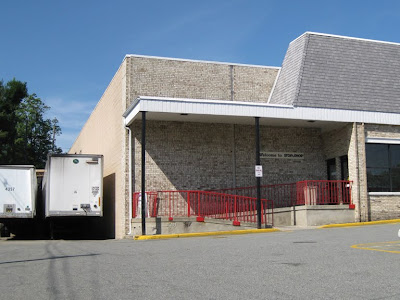 These doors as well as the ramp were part of the 80's remodel. Produce is in this corner of the store. 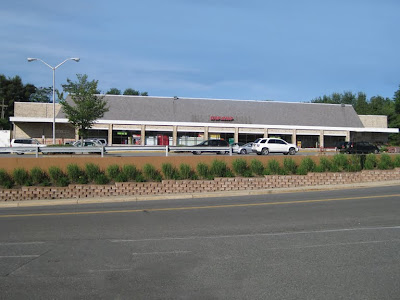 The interior decor is Grand Union's very last look before they went under. But here it's not very deluxe like I have seen in other stores. Surprising since the Sparta store was so successful. Stop and Shop has done very little to the interior and absolutely nothing to the exterior. I'm sure they've been planning on building a new store in Sparta since day one. 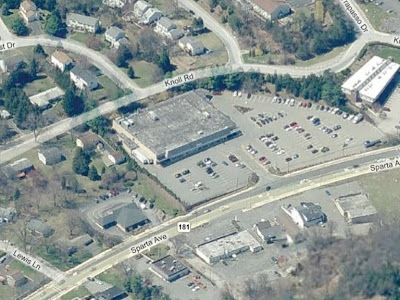 Not a huge store by today standards but imagine this place back in the 70's! 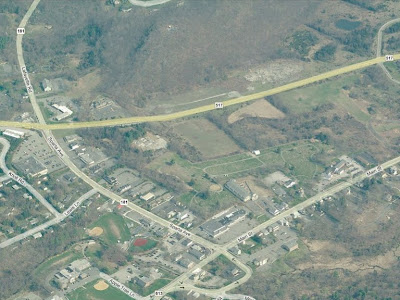 The yellow highlight road is the Rt. 517 extension which opened back in the 90's. It was in the planning stages for many many years. It is also a big reason for the demise of the Acme. Prior to the extension, traffic coming in from Route 80 would have to cut through Sparta to get to Newton and other surrounding towns. All this traffic passed the Acme. After the extension was opened traffic through town decreased dramatically which affected both the Acme and the A&P.

The new Stop and Shop is going to be built along this extension towards the right side of the photo. I can't find details online as to exactly where. There is also no information online as to why construction has yet to start on the obnoxious 69,000 square foot. Part of the delay is due to S&S's efforts to obtain a liquor license. In the end, residents voted to not allow the creation of a new liquor license for the store. Stop and Shop says they are moving ahead with plans for the new store but there is still no sign of construction in the area.

So if Stop and Shop builds a new store... what will happen to the old one? Could make for a brand new Sparta Acme! Not gonna happen. S&S has already said they intend to keep the lease on the old store and use the building for "storage". We'll have to see how that goes over. Residents already claim that S&S is price gouging since it's the only grocery store in town. I would be curious to know how business is at the store since it was converted from the beloved Grand Union.