Welcome to Acme Style's first "Bonus Store of the Month"! As much as I love Acme, I will, on occasion, feature stores from other chains with compelling architecture or history. Probably won't be posting one every month, but couldn't resist the title!

So let's start off with this Stop and Shop location just off of Rt. 3 in Clifton NJ. It is located about a mile up the road from a brand new Acme that will be making an appearance in an upcoming post. It is also located about 2 miles away from another very large Stop and Shop which has just been remodeled with S&S's new look... a look that I find absurdly generic and downright appalling. I think S&S is missing the mark with their new look but that's a whole other post. In the meantime... this store is being torn down so a new Super Stop and Shop can be built. Not good news for the Acme down the street. 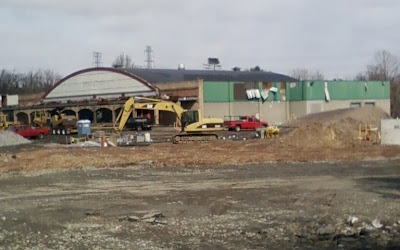 This store was a Grand Union for many many years. Not sure what it was originally. Stop and Shop acquired most of the Grand Unions when the chain went bankrupt in the early 2000's. The Stop and Shop about 2 miles down the road was an Edwards. Both chains were owned by Ahold but the Edwards banner was retired with hopes that the Stop and Shop banner would more effectively draw business away from ShopRite and Pathmark. I don't thing Ahold had the level of success they were hoping for with the switch. 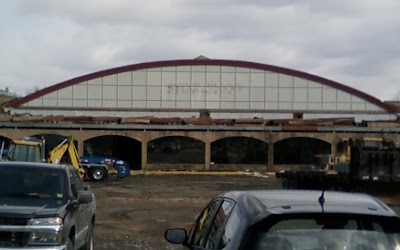 The interior ceiling was not arched like the exterior. A drop ceiling had been added at some point. The windows along the front are very distinctive to Grand Unions. This section was added on during the chain-wide 80's remodel. Many locations received additions very similar to this. This store was remodeled again in the very late 90's. Grand Union was having tough times throughout the 90's but did manage to get a cash infusion from partnering up with another company. This money was quickly spent remodeling stores in hopes of saving the chain. This particular location received the deluxe remodel package and was among the nicest Grand Unions I had ever been in. The wall graphics, faux hardwood floors, color scheme, old fashioned/retro decor... all among the best of it's time. Unfortunately for Grand Union,these remodels didn't bring in enough extra cash to keep the company afloat. The company went under in 2001. Stop and Shop took over this location did little to the interior when it took over, rightfully so. Most Grand Unions were closed for just a few days as they were transformed to Stop and Shops. The big difference at this location was the front end where S&S put it's own, hideous green and red checkout stands where GU's stylish front end used to be. 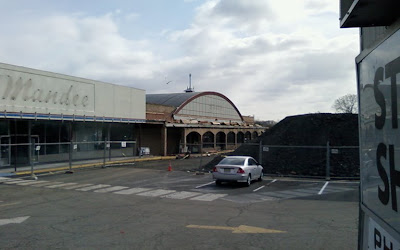 There is a trailer just to the right that is serving as the temporary Stop and Shop pharmacy. I don't remember this store having a pharmacy but I can't imagine new customers wanting to get their prescriptions from a trailer in the midst of the construction mess. So it must be for use of existing customers. 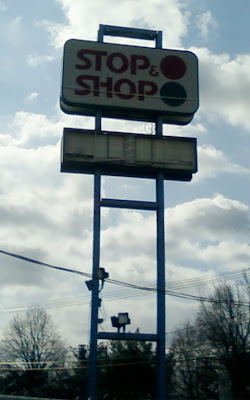 The Stop and Shop sign is all you can really see of the store from Rt. 3 as you are whizzing by. 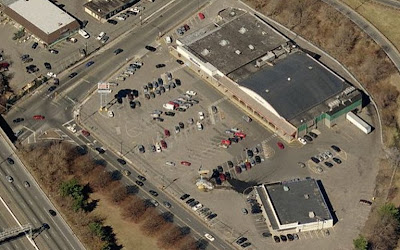