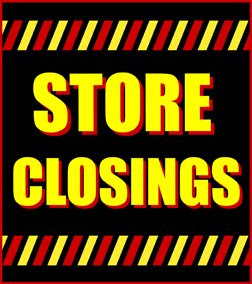 After suffering losses of nearly 3 billion dollars, SuperValu announced the closing of 50 stores across the country. 4 of the stores to be closed are Acme Markets. They include the following locations:

The Ambler store appears to be a classic 50's styled Acme with no major renovations over the years. It's surprising that this location has not closed sooner. The West Chester store on Rt. 322  is a different story. It opened in 2004 but had the unfortunate luck of being located close to a Giant Food Store. Giant is known for it's aggressive pricing and huge selection. The chain continues to spread eastward into Acme's territory. The Collegeville store first opened in 1967 and relocated to a larger space in the mid 70's. The store was expanded and remodeled in the mid 90's. This location also has competition from two nearby Giants.

The Newton store opened in the late 50's. A classic stand alone Acme in a residential neighborhood. The store received the extensive mid 80's remodel that swept most of the chain. The interior was expanded slightly but the store remained small with only 8 aisles. In the late 90's the department signage was upgraded to the blue and beige "convenience store" look with no other upgrades. The red oval logo remains on the outside of the store. I will be posting pictures of this store soon.

Ambler will close later this month. West Chester, Collegeville and Newton are scheduled to close on February 25.
Posted by Acme Style